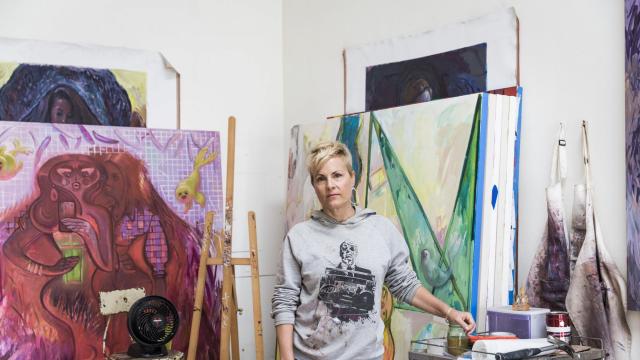 Chuck Close, the acclaimed artist whose massive portraits reside in the world’s top museums, is facing allegations from several women that he sexually harassed them when they came to his studio to pose for him.

Two women recently told The New York Times that Close had asked them to model naked for him, requests that made them feel exploited and uncomfortable. And Tuesday, HuffPost published similar accounts from women, including one who described stripping in front of Close. HuffPost reported he then moved toward her in his wheelchair “so that his head was inches away from her vagina,” and said it “looks delicious.”

In an interview Wednesday, Close, 77, denied making this comment but acknowledged that he has spoken to women candidly and even crudely about their body parts. He said he did so in the interests of evaluating them as possible subjects, and he said he apologized if he had made women feel uncomfortable. He said he had brought women to his studio for artistic reasons, and generally paid them to audition for photographs, since he occasionally produces daguerreotype nudes, several of which were featured in a 2014 survey at his gallery, Pace.

“I’m inviting them to my studio to audition. I don’t have a camera there, so I have to see their bodies — it’s a very expensive process,” Close said. “I’ve never had a complaint in 50 years, not one.”

“Last time I looked, discomfort was not a major offense,” he added. “I never reduced anyone to tears, no one ever ran out of the place. If I embarrassed anyone or made them feel uncomfortable, I am truly sorry, I didn’t mean to. I acknowledge having a dirty mouth, but we’re all adults.”

In a statement earlier Wednesday, Close also sought to defend himself by citing his own physical disability. Close has limited use of his arms and legs.

“As a quadriplegic, I try to live a complete, full life to the extent possible,” he said. “But given my extreme physical limitations, I have found that utter frankness is the only way to have a personal life.”

Modeling nude for artists is an age-old tradition. But there is an unofficial code of conduct associated with painting someone nude that includes informing models in advance that would be expected to undress; making sure the subject is comfortable posing unclothed; refraining from commenting on a model’s body; keeping the atmosphere professional and avoiding personal questions.

According to the women who spoke to The Times and HuffPost, Close violated this code, making inappropriate comments about their bodies, probing into their private lives and holding out the prospect of their being painted by a venerated artist to lure them to his studio, with what seemed to them no real artistic intent or result. In 2010, the artist Langdon Graves and her art class of teenagers were invited to appear on Sundance Channel’s “Iconoclast” series, featuring Close and the magician David Blaine, she told The Times. The day after the shooting, Close called Graves, complimented her on her artwork and her teaching and invited her to his studio. “Because he went at it from an angle of me being an artist — an educator — it seemed meaningful,” Graves recalled. “I realize now I was incredibly naive walking into this situation.”

None of Close’s studio assistants were present when she got there. He poured her a glass of scotch and showed her his work. Then he said that the real reason he’d asked her over was so that she would pose nude for him. “He showed me portraits of Hillary Clinton and Brad Pitt and it really seemed like, of course: He’s doing these daguerreotypes, how could anyone say no to posing for Chuck Close?'”

But then Close said that he made his models audition for him first, Graves recalled. “I’m at this point a little tipsy and totally flattered — in the presence of one of my heroes,” she said. He wheeled over to the bathroom, she said, “and asked me to take my clothes off. Then he started telling me about sexual acts that he and a local waitress perform on each other.” He also asked Graves questions about her intimate grooming and remarked on how lucky her boyfriend was.

“I thought, ‘I don’t want this man to be saying these things to me,'” she said. “It was just this profound disappointment.” When Graves made clear she was not going to cooperate, Close wheeled himself over to his easel and went back to work. “I let myself out,” she said.

Close said he did not remember this incident but that it sounded possible.

Another artist, Delia Brown, told The Times she met Close at a dinner party in the Hamptons in 2005, and he said he was a fan of her work and asked her to come pose for a portrait in his studio. “I was over the moon excited because having your portrait done as an artist by Chuck Close is tantamount to being canonized,” Brown said.

She shared the news with a prominent collector of her work, Glenn Fuhrman, who was also present at the dinner, hosted by Mickey Straus, then the longtime chairman of Guild Hall in East Hampton, and his wife, Leila. “He was excited for me,” Brown said of Fuhrman.

But when she called Close the next day, as he’d requested, the artist said she needed to agree to model topless.

“My heart sank,” Brown said. “I thought, ‘That’s not how he photographs artists.’ I immediately felt a little bit insulted.”

She told Close she had to think about it and ultimately decided against it. “I came to the conclusion that I was not being photographed as an artist but as a woman,” she said. “I said, ‘I hope I can still come to your studio.'” But when she called a few weeks later to arrange that visit, Brown said, Close “acted like he did not know me.”

Close did not dispute her account. He also said that he pays women $200 for these auditions, and that he would have paid them $600 had he ultimately decided to photograph them. “Is it wrong to pay someone for their time?” Close said. “It seemed to me like the gentlemanly thing to do.”

Brown said that having to tell Fuhrman about this turn of events only added to her level of disappointment. “It was humiliating to say to this person who’s a huge supporter of my work, ‘Actually, it was conditional on me taking my top off’ — telling one of my big patrons, ‘This person we both admire doesn’t actually admire me.'”