John McCain Is Honored in Arizona, With Tears and Tributes 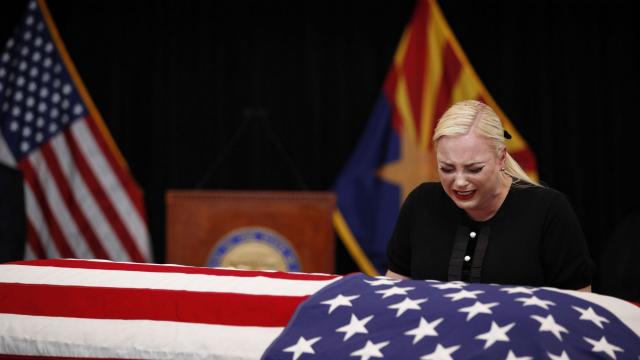 PHOENIX — Military veterans lined both sides of the Capitol Plaza here Wednesday as a black hearse delivered the coffin carrying Sen. John McCain to the rotunda, where constituents began saying farewell to the war veteran who became a towering political figure in this part of the West.

As McCain was lying in state, his immediate family and Arizona political leaders paid tribute to the naval aviator, who endured torture as a prisoner of war in Vietnam. They remembered him as an example of a statesman striving to unite Americans regardless of their political beliefs.

“It’s our job to show our respect,” said Robbie Campbell, 59, a statewide captain of the Patriot Guard Riders, an organization comprised largely of motorcyclists who attend the funerals of U.S. military service members and first responders. “We don’t want anybody that serves to protect our freedoms to not know that the whole nation cares.”

Gov. Doug Ducey of Arizona embraced McCain’s wife, Cindy McCain, as she arrived for a short private ceremony on the morning of what would have been her husband’s 82nd birthday.

A small group of political figures delivered brief remarks honoring and remembering McCain. His family listened quietly, then lined up to pass by the coffin.

Cindy McCain briefly pressed her face against it as those in the chamber absorbed the scene. At one point, McCain’s daughter, Meghan McCain, broke into tears as she approached the coffin to touch it. Her wailing echoed throughout the rotunda.

John Kyl, a former Republican senator, said that although some people disagreed with McCain’s political positions, “that should not diminish our gratitude for his service.”

“I have been with Sen. McCain all around the world, and I will tell you he had better instincts about how, when and where to assert American power than any other leader that I’ve known,” said Kyl, who has been mentioned as a potential choice to fill the seat left vacant by McCain.

“He had been to more countries, knew more foreign leaders and had a better grasp of history than any other American official, including our secretaries of state,” Kyl continued. “One illustration: When others were looking into Vladimir Putin’s eyes with an eye of understanding him and reaching accommodation with him, John said, ‘I looked into his eyes and I saw KGB.'”

Also speaking were Ducey and Sen. Jeff Flake, R-Ariz., who is not running for re-election. Three former governors, Fife Symington, Janet Napolitano and Jan Brewer, were also in attendance, as were several state legislative leaders.

“We think sometimes that politics is life and death,” said Ducey, who will name the replacement to fill McCain’s seat until the next general election in 2020. “But John McCain knew better — because he had actually seen death and dying and tragedy.”

“Along the way, he did it with humor and humanity, and without compromising the principles he held so dear,” Ducey continued, quoting McCain when he once said, “I’d rather lose an election than lose a war.” Said the governor: “We knew he was telling us the truth.”

Members of the public lined up outside the Arizona state Capitol for a general viewing throughout the afternoon.

“I’m a lifelong Democrat, and I also served in Vietnam, so I came here to honor a man who never forgot about fellow veterans,” said Marlin Porter, 71, a member of the Gila River Indian Community who waited in line for the viewing. “John McCain was just so different from what we have in the White House now: a president who disrespects veterans.”

Charlie Phan, an immigrant and veteran of the South Vietnamese Army, came to the Capitol wearing a military uniform. “He fought the communists and sacrificed for us,” said Phan, the owner of a nail salon in Phoenix.

McCain had represented Arizona in the House of Representatives and Senate since moving to the state in the early 1980s.

He wielded outsize influence in Arizona, emerging as one of the state’s most powerful leaders, often compared to figures like Carl Hayden, the Democrat who served in Congress from 1912 to 1968, and Barry Goldwater, the pioneer of the modern conservative movement who was the Republican presidential nominee in 1964.

Only two other Arizonans have had the honor of lying in state in the Capitol: Marilyn Jarrett, a former state senator, in 2006, and the Olympic titan Jesse Owens, in 1980.

Shortly before 2 p.m. local time, doors to the Capitol opened to the public. The Guard of Honor was to remain on duty throughout the night, as long as people were waiting in line.

“He was a very open man,” said Antonio Velasquez, 46, a Christian pastor and leader of a group seeking to promote the rights of Guatemalan immigrants. Velasquez brought a wreath to honor McCain on behalf of fellow Guatemalans, both in the United States and in Guatemala.

Jessica Grant-Wahpeta, an Arizona chef, said she paid tribute to McCain because “he stood up for all Americans.”

“I wasn’t in his party and didn’t always agree with him,” Grant-Wahpeta said. “But he was someone who knew how to do the right thing.”

The ceremony Wednesday was the first of several events taking place in the coming days to honor McCain. On Thursday, the senator’s body will be carried from the Capitol in a motorcade that will deliver him to the North Phoenix Baptist Church, where a memorial service will be held. About 1,000 seats at the church are available to the public.

From the church, McCain’s remains will be flown to Washington for another viewing Friday at the U.S. Capitol. After a memorial service at the National Cathedral, McCain will be buried at the U.S. Naval Academy Cemetery in Annapolis, Maryland.