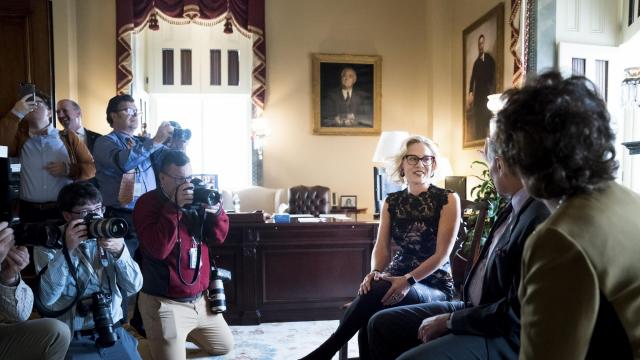 Rep. Kyrsten Sinema’s upset victory in Arizona on Monday night marked the first time a Democrat has been elected to the Senate from that state since 1988. Here are six takeaways about the race and the changing nature of Arizona politics.

— A Political Realignment Is Possible

With Republican politics in Arizona looking less like the brand practiced by senators like John McCain and Jeff Flake — independent-minded, relatively bipartisan at times — many centrist voters in the state’s GOP are increasingly politically homeless.

That has had an impact in suburban areas like vote-rich Maricopa County, which includes Phoenix. McCain and President Donald Trump both carried the county in 2016, but Sinema was ahead there by nearly 4 percentage points over the Republican candidate, Rep. Martha McSally.

Sinema’s win signals that a political realignment in Arizona is possible for federal offices. Hillary Clinton lost the state in 2016 by about 3.5 percentage points; Sinema was a different kind of candidate, with a different message, and she won statewide by about 1.7 points.

Although McSally tried to paint Sinema as a far-left candidate by drawing on her history in the Arizona legislature and past anti-war activities, Sinema had a voting record in the House that demonstrated a more independent agenda and moderate positions.

In contrast, while McSally insisted that she supported health care coverage for patients with pre-existing conditions, her voting record on health care bills in the House told a different story. She voted repeatedly to repeal the health care law that covered such patients.

Women have been credited with helping Democrats this year, but the story in Arizona has as much to do with the shift toward blue in places that were shaded purple.

Democrats picked up statehouse seats in suburban areas where such a switch would have been nearly impossible four or perhaps even two years ago, and they look set to gain other seats in state government. They now have a 5-4 advantage in the congressional delegation, furthering the representation of younger, more educated and in many cases tech-employed voters who do not support Trump’s politics.

“Right now, there are 181,000 voters who voted for Democrat Kyrsten Sinema for United States Senate and Republican Doug Ducey for governor,” said Paul Bentz, a polling expert in the state. “Ultimately, Sinema’s ability to appeal to female, unaffiliated and independent voters who surged at the election put her over the top.”

McSally was saddled with a divisive Republican primary race in which she ran to the right on immigration and alienated some moderate voters. The fight left her battle-worn and sliding toward Trump for support, while Sinema spent the primary season painting herself as a cheerful, independent-minded leader. Sinema stuck to that message through the general election with a disciplined and well-financed campaign.

— Trump in the Sun Belt

McSally tried to unify Republicans around her candidacy, appearing with relative moderates like Mitt Romney and Susan Collins. But there was little question that she also tied her campaign closely to Trump, appearing with the president at a mid-October rally. Some Republicans in the border state saw that event as a major misstep, pointing to her sagging numbers in the weeks following the visit.

Trump’s focus on a hard-line immigration policy in the final weeks turned off both Latino voters and independents, who make up Arizona’s largest voting block. That has not gone unnoticed by Democrats, who will certainly keep a close eye on the Sun Belt as they turn their focus to 2020.

“McSally’s embracing of Trump sealed her GOP primary victory although it alienated key swing voters — suburban women and moderate independents — which lost her the general election,” said Mike Noble, a Republican pollster who leads OH Predictive Insights based in Phoenix.

McSally gave up her congressional seat representing the greater Tucson area to risk a Senate run, leaving a vulnerable swing district up for grabs down south. Ann Kirkpatrick, a former representative, harnessed national progressive energy to flip the seat back to Democratic control, increasing the party’s majority in the House.