Are Rural Voters the ‘Real’ Voters? Wisconsin Republicans Seem to Think So 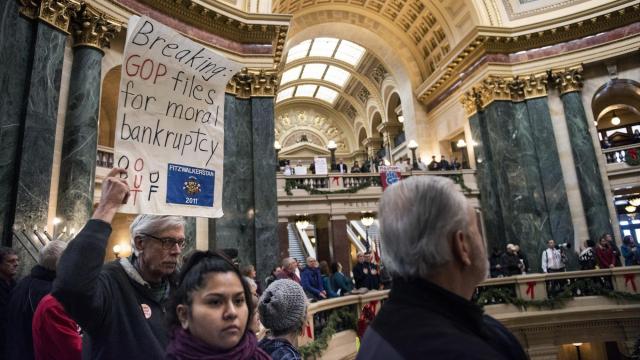 In much of Wisconsin, “Madison and Milwaukee” are code words (to some, dog whistles) for the parts of the state that are nonwhite, elite, different: The cities are where people don’t have to work hard with their hands, because they’re collecting welfare or public-sector paychecks.

That stereotype updates a very old idea in U.S. politics, one pervading Wisconsin’s bitter Statehouse fights today and increasingly those in other states: Urban voters are an exception. If you discount them, you get a truer picture of the politics — and the will of voters — in a state.

Thomas Jefferson believed as much — “the mobs of great cities add just so much to support of pure government,” he wrote, “as sores do to the strength of the human body.”

Wisconsin Republicans amplified that idea this week, arguing that the Legislature is the more representative branch of government, and then voting to limit the power of the incoming Democratic governor. The legislature speaks for the people in all corners of the state, they seemed to be saying, and statewide offices like governor merely reflect the will of those urban mobs.

“State legislators are the closest to those we represent,” Scott Fitzgerald, majority leader in the Wisconsin Senate, said in a statement after Republicans voted on the changes before dawn Wednesday. They’re the ones who hold town hall meetings, who listen directly to constituents across the state. Legislators should stand, he said, “on equal footing with an incoming administration that is based almost solely in Madison.”

That argument is particularly debatable in Wisconsin, where the Legislature has been heavily gerrymandered. But Fitzgerald’s jab at Madison was notable, too.

Fitzgerald was essentially recasting the new Democratic governor, Tony Evers, not as the winner of a statewide mandate but as a creature of the capital city, put there by people in the cities. (Never mind that the outgoing Republican governor, Scott Walker, and the state Legislature are based in Madison, too.)

Robin Vos, Republican speaker of the Wisconsin Statehouse, drew this distinction even more explicitly after the midterm election.

“If you took Madison and Milwaukee out of the state election formula, we would have a clear majority,” he said. “We would have all five constitutional officers and we would probably have many more seats in the Legislature.”

This is most likely true, depending on how you define Madison and Milwaukee. But it’s an odd point to make, given that Madison and Milwaukee can’t be removed from Wisconsin. Nor Detroit from Michigan, nor Pittsburgh and Philadelphia from Pennsylvania, nor Raleigh and Charlotte from North Carolina.

“It just is incredibly frustrating and really nonsensical to think about representation in those terms, especially when you’re talking about statewide results,” said David Canon, a professor of political science at the University of Wisconsin. He pointed as well to comments by Walker arguing that his loss in the governor’s race wasn’t a rejection by voters so much as a reflection of unusually high turnout among people who weren’t part of the voting population in his previous victories. Walker lost the race by 29,000 votes statewide. In Dane County, home to Madison, about 42,000 more people voted in the governor’s race this year than did in 2014.

“How can that not be a repudiation by the voters?” Canon said. “It only isn’t if you don’t care about the voters in the parts of the state that are Democratic.”

Republican gerrymandering in states like Wisconsin, Michigan and North Carolina have pushed the limits of how much the urban voter can be devalued.

In Wisconsin, Democratic candidates for the state Assembly won 54 percent of the vote statewide. But they will hold only 36 of 99 seats. They picked up just one more seat than in the current Assembly, a result of a gerrymander drawn so well that it protected nearly every Republican seat in a Democratic wave election.

As Democrats have become ever more aligned with urban voters and Republicans with rural ones, these lopsided partisan results today are now a clear reflection in many states of the relative power of rural and urban voters.

Some of the disparities in Republican-controlled state legislatures simply reflect the geographic clustering of Democrats in cities, and are not a result of lines drawn in gerrymandering. Republicans are more evenly distributed across space, while Democrats tend to run up their votes in a smaller number of places. That geography doesn’t matter in statewide elections for offices like governor. But in legislative bodies, it does.

To Republicans in Wisconsin, the Legislature is more representative precisely because it reflects that geography, to their advantage.

“The most positive spin you can put on it is that we have a system of geographic representation, and so it is true that our legislative bodies represent areas, not the statewide population,” said Matt Grossmann, director of the Institute for Public Policy and Social Research at Michigan State University. “But obviously it also fits with a long history of demeaning or counting less the support that your opposition party has.” Another way to put this is that, in some ways, we’ve designed systems that give rural voters disproportionate power as a feature, not a flaw.

“When we think about the federal government and the U.S. Senate, it’s clearly a feature,” said Tom Ivacko, associate director of the Center for Local, State, and Urban Policy at the University of Michigan. “Within an individual state, it’s a little bit of both. But I think the impact is corrosive in many ways to the democratic process over time. It certainly leaves many voters feeling like their vote doesn’t count.”

The argument that legislatures are somehow more representative — and closer to the people — would be more true, he said, if they weren’t so heavily gerrymandered, on top of the natural patterns in where voters live.

For Republicans now, the argument that urban voters distort statewide races may justify policies urban voters do not want. But that comes at a political cost, too.

“When you clarify for people that it’s ‘Madison and Milwaukee’ versus the rest of the state, well, the people in Madison and Milwaukee hear that, too,” said Kathy Cramer, a political scientist at the University of Wisconsin who has written about the state’s urban-rural divide. “And it’s just as mobilizing for them.”