Arab and Coming Out In Art That Speaks Up 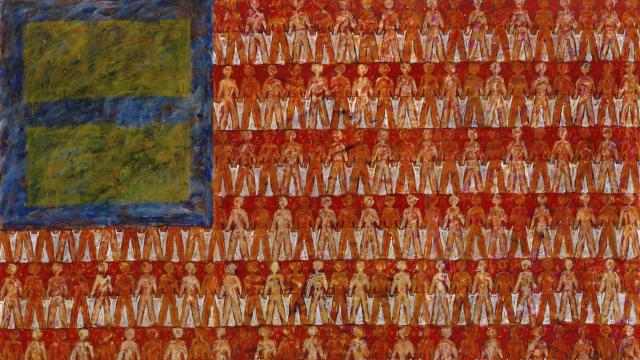 DEARBORN, Mich. — Nabil Mousa’s first solo art exhibition was a joyous occasion, but it still brought tears to his eyes when he introduced his husband to the audience.

Mousa was born in Syria and immigrated to the United States with his conservative Christian parents. In 2000, when he came out, they soon cut off contact and disowned him.

Now, he was melding his two identities — gay and Arab — in a show of paintings here. And what was more surprising was where his work was being displayed: the Arab-American National Museum, which was focusing for the first time on a gay artist’s exploration of discrimination.

Mousa, 51, is among a small but growing number of LGBT artists of Arab descent incorporating their sexual identity into their work. In doing so, they confront their own apprehensions, along with censorship and surveillance in the Arab world, and what some educators and curators say is a reluctance by some institutions in the United States to exhibit their work on its artistic rather than political merit.

In “American Landscape: An Exploration of Art & Humanity,” on view through April 8, Mousa’s gay identity is clearly recognizable in a large work that replaces an American flag’s field of stars with the Human Rights Campaign’s bold “=” symbol. A montage about ending religious bigotry is embedded in another piece.

Mousa said he manipulated the American flag to address “the hypocrisy in our Constitution, where they talk about every man is created under God, equal to others. But when you really look at it, people like me who are gay or people of color, we are substandard.”

Mousa’s gallerist, Oksana Salamatina, approached the Arab-American National Museum last year because of difficulties finding a space to exhibit paintings by the artist, who lives in Atlanta, Georgia.

Devon Akmon, the director of the Arab-American National Museum, said the “American Landscape” show “challenges that small narrative that exists” about what ideas Arab-Americans will accept. “We’re trying to shed light on the diversity of our community,” he said, adding that there is a place in his museum for dissenting voices.

He added, “This isn’t just a place to come and look at objects on a wall.”

Dearborn, bordering Detroit, has one of the largest Arab-American communities in the country and is the home of the Arab Community Center for Economic and Social Services. Known as ACCESS, the group opened the National Museum in 2005 to promote Arab-American culture.

In June 2016, the museum examined the subject of gay discrimination with the Lebanese band Mashrou’ Leila, whose lead singer, Hamed Sinno, identifies as queer. A panel discussion drew several dozen participants, without incident.

Kathy Zarur, a curator and professor at the California College of the Arts, who has also worked for the Sharjah Art Foundation in the United Arab Emirates, said she did not know of any other Arab art-focused institution holding an exhibition with LGBT themes.

“It’s really useful because it offers audiences the opportunity to learn that this art exists at all and then gives them an idea of the depths and the breadth of it,” Zarur said. She added that even among cultural institutions in the United States that feature artists of Arab descent, “the tendency is to do survey exhibitions that lump artists together” by nationality but rarely explore issues of sexual identity.

Across the Arab world, openly gay, lesbian and transgender people face persecution. The penalty in some countries is imprisonment; even where there are no laws on the books, gay people may still be prosecuted. Men accused of being gay have also experienced deadly violence in regions of Syria and Iraq controlled by the Islamic State.

While not all Arabs are Muslim, Quranic interpretation of homosexuality can affect the broader Arab view. Experts in Middle Eastern studies said that some Muslim and non-Muslim Arabs justify anti-LGBT bias using the Quran, Bible and other religious texts, but that these are justifications of already held beliefs, not interpretations. Men and women, they said, have engaged in same-sex eroticism throughout the Muslim world, as evidenced by Arabic poetry. Colonial interactions might have also influenced biases, bringing European notions of homophobia and views of homosexuality into the culture. (Others who have studied the field point out that Islamic interpretations of privacy can protect acts that take place outside of the public sphere.)

In the United States, LGBT identity in art was long overlooked, or ignored by mainstream museums. Among the first institutions to explore this theme were the Leslie-Lohman Museum of Gay and Lesbian Art and the New Museum, both in New York. The New Museum’s current show, “Trigger: Gender as a Tool and a Weapon,” through Jan. 21, examines concepts of trans and gays embodied in new art.

Exhibitions that combine LGBT and Arab themes are rarer still. Among the exception was a 2015 show at Leslie-Lohman, “Irreverent: A Celebration of Censorship,” which showcased attempts to suppress gay sexuality and creativity.

Now works with these themes are beginning to enter museum collections. The Hammer Museum in Los Angeles recently acquired the film “Tomorrow Everything Will Be Alright” by the Lebanese artist Akram Zaatari. Ann Philbin, the Hammer’s director, said Zaatari’s work addresses “themes that are specific to his identity as a gay man living in Beirut,” examining “the way two separated lovers navigate their desire in both public and private space.” “In many places in the world homophobia is once again on the rise,” said Philbin, who recently visited Beirut. “And being queer and out in the Middle East is a loaded proposition. As usual, artists are the canaries in the coal mines — giving voice to those who cannot represent themselves.”

The Los Angeles County Museum of Art, the New Museum and the Metropolitan Museum of Art say they have exhibited the work of Arab and Muslim artists who are gay but choose not to incorporate their identity into their art, or make their sexuality known publicly.

Sheena Wagstaff, head of the department of modern and contemporary art at the Met, said she prefers the work to speak for itself. “Artists often operate below the radar and they have to,” she said in a phone interview. “I think that is a very important point to make — that many of these artists are incredibly brave.”

Several gay or lesbian artists working in both the West and in the Middle East said they did not wish to be interviewed for this article.

Among those in the 2015 Leslie-Lohman exhibit was the Lebanese artist Omar Mismar. Within the Arab world, Mismar said, Lebanon is viewed as “allowing a space for out gay artists and creators to exist, but at the same time things are never really guaranteed.” Laws criminalizing homosexual acts are still in effect, with arbitrary enforcement.

His installation, “The Man Who Waited for a Kiss,” consisted of murky, surveillance-style photographs of himself interacting with men he met in the United States, through Craigslist, Grindr and Scruff. He created the project while pursuing a double master’s degree, in fine arts and visual and critical studies, at the California College of the Arts, as an effort to show “what gay men can do in other cities.”

Mismar, 31, teaches at the American University of Beirut and the Académie Libanaise des Beaux-Arts, which allows him exceptional maneuverability. Yet none of his gay-identified work has been exhibited in Lebanon. A work called “A Hands Routine” maps the places he and his boyfriend felt safe holding hands while in a car roaming the streets of Beirut. “Holding hands becomes a risk, a secret act, fun for being dangerous,” he wrote in an introduction to the artwork, made of graphs that resemble sheets of music. Location can mitigate fear, and such exhibitions flourish in the gay mecca of San Francisco. Jamil Hellu, 41, an artist there, was born in Brazil to a Syrian father and Paraguayan mother, moving to the United States in 1996.

He has merged his gay and Arab identities in provocative, sexually-charged art incorporating a single stereotype: the bear, a large, sometimes overweight, hirsute man.

“Bears are signifiers for gay culture and signifiers for Arab culture,” Hellu explained. His installations include photographic self-portraits, along with black and white line drawings of himself in jockstraps and kaffiyehs, the Middle Eastern male headscarf. “There is not only a duality, but a tension,” he said. “My work is thinking about that tension, to explore that conflict.”

Hellu says that many LGBT Arabs eschew self-identifying. “It is easier not to have labels. The label will hurt you, publicly and even privately.”

Many Arabs and Muslims who see his work tell him he is brave. “My experiences have been very positive so far,” he said. “It would be a very different story if I brought this work to Turkey or showed this work in Qatar.”

Hellu, along with other Arab and South Asian artists, will participate in San Francisco’s LGBT-focused “The Third Muslim” exhibit beginning Jan. 25 at the SOMArts gallery.

Among the most extensively exhibited gay artists of Arab descent is half of one of the world’s most famous power couples: the painter and installation artist Jwan Yosef, fiancé to singer Ricky Martin. Raised in Sweden by Syrian parents in a mixed Christian and Muslim household, Yosef has exhibited throughout the United States and Europe, though never in the Middle East.

In an email, he said he includes Arab themes in his work, but “the immediate presentation of the work would be more Germanic. This duality also made the work more accepted.” Sexual imagery is coyly suggested: One 2014 work, “Twin Towers,” views a man’s covered crotch between his bent legs.

Mejdulene Shomali, an assistant professor of gender and women’s studies at the University of Maryland, said that anti-Arab racism and Orientalist views of the Arab world have combined to create opinions of a community as backward, yet highly sexualized. The result has often been self-censorship by LGBT artists, but Shomali said that is changing, with gay male Arab artists, in particular, challenging old viewpoints, and often finding a welcome reception.

Audiences, she said, are more interested in hearing gay men’s stories. Exhibitions like “American Landscape” answer the question “will Arab and Arab American audiences be open to seeing and including queer folks as part of their culture — and answering with a resounding yes.”

For his part, Akmon, of the Arab-American National Museum, said he believed such shows can touch a broad range of viewers, showing them the diversity and complexity of Arabs in America.

“People have such a small perception of who we are,” Akmon said. “It’s reductive. We’re like everybody else. We’re complex, we’re diverse. Maybe even sometimes contradictory.”