Research Triangle Park — Apple on Monday announced a new $1 billion-plus campus and engineering hub that will create thousands of high-paying jobs in the Triangle over the next five years.

According to WRAL News reporter Travis Fain, the campus will be built in RTP on land purchased in late 2018 by a company identified as Acute Investments LLC. The site is located off the Triangle Expressway between Louis Stephens Drive and Davis Drive. Listed in the deal is Bruce Thompson, a registered lobbyist for Apple. 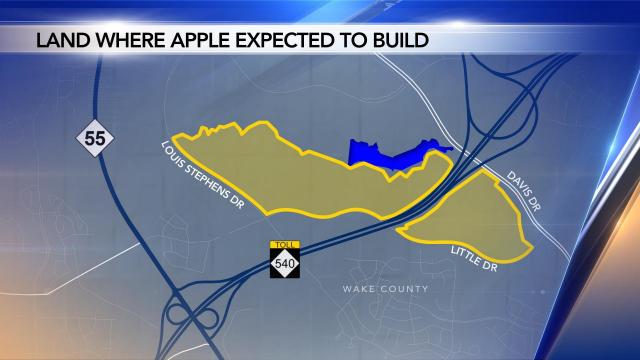 Positions will be primarily in artificial intelligence, machine learning and software engineering, according to information provided by the Department of Commerce and the EIC.

"Once this campus is up and running, it's expected to generate more than $1.5 billion a year an economic impact to our state," Gov. Roy Cooper said.

Apple expects to invest some $1 billion in the new campus. The company also agreed to retain some 1,100 existing jobs across North Carolina.

Do you welcome Apple's major expansion to the Triangle or do you have concerns about the impact?

"You can usually double [Apple's job announcement of 3,000] when you take into account all the other firms that will come here because Apple comes," Walden said. "We will celebrate this for years to come. It tells the world that North Carolina – specifically the Triangle – is the place for economic development in the post-pandemic world."

The addition of Apple further strengthens the Triangle as one of the country’s leading high-tech and life science hubs. The Raleigh-Durham metro is already home to IBM’s largest campus, Raleigh-based Red Hat, which is part of IBM, and other high-profile firms such as Lenovo (the world’s top PC seller and a global leader in supercomputers), Cree, Oracle, Cisco and NetApp. Google plans a new engineering hub in Durham, and Microsoft is adding hundreds of jobs in the Triangle.

The region also has landed several significant life science investments for biomanufacturing and ranks among the top five hubs nationally.

"The scope of this project is transformative," said North Carolina Secretary of Commerce Machelle Sanders. It means new jobs, careers. It means an influx of people relocating. It means new partnerships and opportunity. It has a multiplier effect. It means growth for other businesses and industries as well, like real estate, retail, hospitality, among others."

While the Triangle lost out on these high-profile projects, local leaders remained hopeful they would still one day attract Apple as land was acquired in December 2018 in the southern portion of RTP by a firm affiliated with Apple. Leases also were reportedly signed for office space to be used until a new campus was designed, approved by local governments, and built.

North Carolina’s Department of Commerce insisted that the Apple campus remained a possibility. Cooper once described the Apple project as an “open recruiting situation.”

On Monday, it became a reality as the state’s Economic Investment Committee – which is part of the Commerce Department – settled with Apple on a contract calling for millions in tax incentives in return for Apple meeting new job requirements.

"When Apple creates those jobs per this agreement, it has the opportunity to get tax reimbursements of up to almost $846 million over 39 years," Cooper said. "Importantly, as a result of these accountable and transformational incentives, Apple will contribute at least $110 million to North Carolina's Industrial Development Fund that will be available to the 80 North Carolina counties with the most need."

If Apple meets its commitments, a Wake County spokeswoman said, the company would pay only half of the taxes it would without incentives.

Brian Balfour, senior vice president of research at the John Locke Foundation, pointed out that Apple's advantages are not available to all North Carolina businesses.

"Imagine being a small business owner who has paid taxes in North Carolina for years hearing that one of the largest corporations on the planet will be getting a massive tax break," he said.

In addition to the new campus in RTP, Apple is making additional investments in infrastructure and education across the state.

"Apple is showing that they're just not creating jobs and building a new campus. They want to be a committed partner with our state for the long term," Cooper said, citing a conversation with Apple CEO Tim Cook.

According to the governor, Apple has the opportunity to get tax reimbursements of up to almost $846 million over 39 years. In terms of dollars, it is the state's largest incentives deal to date.

Any company that gets tax breaks from the state to create jobs is required by law to contribute to a fund which provides money for broadband internet, roads, bridges and public schools in 80 counties. Over 39 years, if Apple meets its job creation and investment targets, that account will see an additional $112.4 million to help rural communities build infrastructure and attract companies to create jobs in their communities.

"New tax revenue generated by Apple's new campus and the high-paying jobs that come with it will help fund schools, colleges, roads and bridges from the mountains to the coast," said state Sen. Phil Berger.

Dr. Scott Ralls, president of Wake Tech, was among the academic leaders who recognized the opportunity Apple presents to job seekers of the future.

“This announcement means incredible economic impact for our state and outstanding job opportunities. We are excited to work with Apple to maximize those opportunities for the people of our region," Ralls said.

"We stand ready to provide the kind of human talent and ingenuity that is a hallmark of this iconic company," added Peter Hans, president of the University of North Carolina System.

Among the cheerleaders for the project is Apple Chief Operating Officer Jeff Williams, a graduate of N.C. State with a degree in engineering and holder of a master’s degree in business from Duke.

“As a North-Carolina native, I’m thrilled Apple is expanding and creating new long-term job opportunities in the community I grew up in," Williams said in the announcement. "We’re proud that this new investment will also be supporting education and critical infrastructure projects across the state. Apple has been a part of North Carolina for nearly two decades, and we’re looking forward to continuing to grow and a bright future ahead.”

Apple’s investment will mean big dollars for the state, according to Dr. John Connaughton, an economist and professor at UNC Charlotte’s Belk College of Business.

“By 2029, Apple’s investment and job creation is expected to generate at least $1.5 billion annually for the state of North Carolina,” Connaughton said in a statement provided by Apple.

“Innovation has long been North Carolina’s calling card and Apple’s decision to build this new campus in the Research Triangle showcases the importance of our state’s favorable business climate, world-class universities, our tech-ready workforce, and the welcoming and diverse communities that make so many people want to call North Carolina home. This announcement will benefit communities across our state and we are proud to work together to continue to grow our economy and bring transformational industries and good paying jobs to North Carolina.”

The North Carolina expansion is part of a much larger expansion being made by Apple. Over five years Apple said it would invest some $430 billion and create more than 20,000 jobs across several states.

One key component is more research and development of semiconductor chips. Various industries, most especially motor vehicles, have been hampered by shortages in chips. Apple also is moving more of its products to chips of its own designs.

“At this moment of recovery and rebuilding, Apple is doubling down on our commitment to US innovation and manufacturing with a generational investment reaching communities across all 50 states,” said Tim Cook, Apple’s CEO, in the announcement. "We’re creating jobs in cutting-edge fields — from 5G to silicon engineering to artificial intelligence — investing in the next generation of innovative new businesses, and in all our work, building toward a greener and more equitable future.”

Like Williams, Cook has Triangle connections. He earned his master’s degree in business administration at Duke.