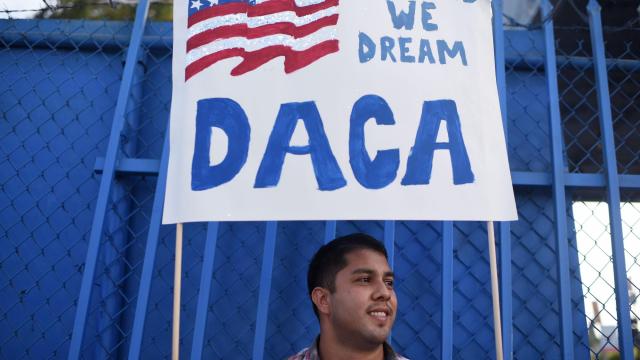 (CNN) — A federal appeals court on Thursday upheld a ruling blocking the Trump administration from ending the Obama-era program that protects young undocumented immigrants who came to the United States as children from being deported -- likely setting up a Supreme Court fight.

The ruling from a panel of the 9th US Circuit Court of Appeals means a nationwide injunction allowing the Deferred Action for Childhood Arrivals program to continue will remain in effect.

President Donald Trump called the ruling "good news" because he never expected the liberal 9th Circuit to agree with the administration and it tees up a potential Supreme Court argument.

"The good news is, by rejecting DACA in the 9th Circuit -- finally, we've been waiting for that -- we get it to the Supreme Court," Trump said at the White House on Friday. "We want to be in the Supreme Court on DACA."

The 9th Circuit ruled that challengers to the decision to end DACA are likely to succeed in their argument that the planned phase-out is illegal.

"We conclude that plaintiffs are likely to succeed on their claim that the rescission of DACA -- at least as justified on this record -- is arbitrary, capricious, or otherwise not in accordance with law," reads the opinion from Judge Kim McLane Wardlaw, an appointee of President Bill Clinton.

In September 2017, the Trump administration announced plans to phase out DACA, but lower court judges blocked the administration from doing so and ordered that renewals of protections for recipients continue until the appeals are resolved.

The legality of the program is not at issue in this particular case. Instead, lower courts are examining how the administration made its decision to end DACA.

Thursday's case was brought by the University of California, as well as California and a few other states.

"This fight, of course, is far from over," he said in a statement. "We will continue to defend Dreamers and DACA all the way to the Supreme Court if necessary."

The Justice Department had already asked the Supreme Court to review the district court's injunction, arguing the Obama administration had allowed some "700,000 aliens to remain in the United States even though existing laws provided them no ability to do so."

The Trump administration's Department of Homeland Security ended the policy "based on serious doubts about its legality and the practical implications of maintaining it," the Justice Department wrote in a court filing Monday.

"Today's ruling is yet another blow to the Trump administration's efforts to dismantle DACA, but it may also only be a temporary one," said Steve Vladeck, a CNN legal analyst who's a professor at the University of Texas School of Law.

Now that the 9th Circuit has ruled, "it seems much more likely that the justices will agree to the government's already-pending request that they settle the matter, perhaps as soon by the end of the current term in June," Vladeck added.

Trump on Wednesday blamed the injunction for the White House and Congress not reaching a deal on DACA.

"Had the judge not ruled that way, I think we would have made a deal," Trump said at a news conference. "Once the judge ruled that way, the Democrats didn't want to talk anymore. So we'll see how it works out at the Supreme Court."

Options that have been discussed are extending DACA or providing a path to citizenship in exchange for funding for a wall along the US-Mexico border.