Apex, N.C. — A set of twins in Apex have a standoff about who was born first.

About a half-hour later, Peter's twin sister, Allison Raye Cirioli, known as "Baby B," made her entrance into the world.

But because they were born as the clocks changed over to Standard Time from Daylight Saving Time, Allison's time of birth was 1:06 a.m., which makes her 26 minutes older than her brother even though he was born first. 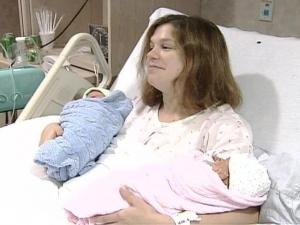 "Peter was born first, but my time was first," Allison said.

Despite what the clock says, Peter deems himself the older of the pair.

"I think I am because even though her time is first, technically I'm like 30 minutes older," he said.

“We just never even thought about it until after he was born and then we realized it was going to happen. It was really kind of amazing,” Laurie Cirioli, the twins' mom said.

WRAL was at WakeMed Cary with the family 11 years ago, shortly after the twins were born.

"We'll let them work it out between themselves. I don't want to get in the middle of it," the twins' father, Jason Cirioli, said at the time.

And for the most part, the twins have worked it out.

"They understand what the time change is more, and they are more interested in it, so it became more of a thing this year than in years past," Jason Cirioli said.

In true Generation Z fashion, the twins rang in their birthday with technology.

"This is the first year their birthday was on the time change again," Laurie Cirioli said. "They both stayed up and watched it happen on their phones."