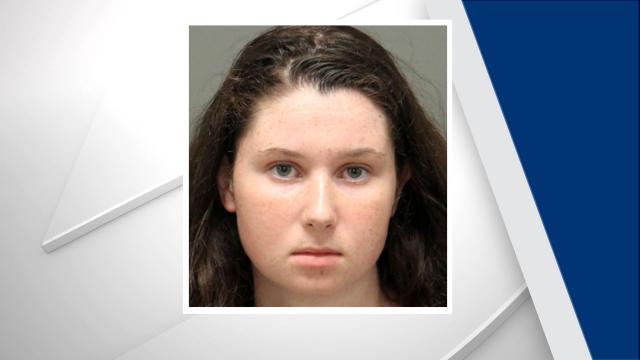 Caroline Quinn Gayle was arrested on Thursday morning near Salem Street in Apex.

Officer Patrick Maggliocco was on duty driving through the area and noticed signs that didn't have marks on them earlier were spray-painted with profanity police said. He saw Gayle walking away from the area, and when he approached, he smelled paint on her. Hearing rattling in her backpack, he asked to search it.

She said, “You got me. I did it.” according to the officer.

She said the reason for vandalism, according to the officer, was an immense frustration with the political climate.

In late August, a sign at the same location, owned by an Apex man, was also vandalized repeatedly. A wooden yard sign, which calls for the re-election of Trump and also endorses Republicans Dan Forest and Mark Robinson, was vandalized with messages including "BLM" and a profanity.

Although the sign that was vandalized Thursday was at the same location, it's unclear whether it was the same sign.