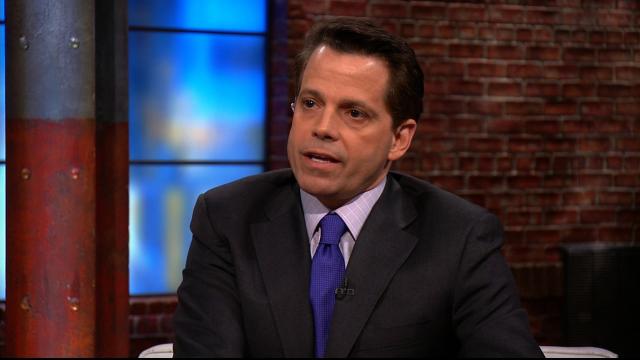 Anthony Scaramucci is out as White House communications director, the latest sign of chaos inside the Trump administration.

Scaramucci's ouster is the most recent high-profile departure from the Trump White House. Chief of Staff Reince Priebus resigned at the end of last week, replaced by John Kelly, whose first day is Monday.

"Anthony Scaramucci will be leaving his role as White House Communications Director," White House press secretary Sarah Huckabee Sanders said in a statement Monday afternoon. "Mr. Scaramucci felt it was best to give chief of staff John Kelly a clean slate and the ability to build his own team. We wish him all the best."

RELATED: The 35 most eye-popping quotes from Anthony Scaramucci's CNN interview

Scaramucci started Monday thinking he could weather the storm surrounding him after a salacious interview he gave The New Yorker magazine, three people who talked to him Monday said. It wasn't until after he attended the Oval Office swearing-in ceremony of John Kelly that he learned he was being asked to step aside.

Kelly delivered the news in a face-to-face meeting with Scaramucci in his office, two people familiar with Monday's sudden turn of events said, making getting Scaramucci out one of his first official acts as chief of staff.

"He had no plans to resign before that," a person who talked to Scaramucci on Monday morning said. "He thought he could fix it."

A White House official said Kelly, a retired Marine general who is known for his fastidious nature, wanted Scaramucci removed from his new role as the communications director because he did not think he was disciplined and had burned his credibility.

"John Kelly is in charge now," one source close to Kelly told CNN as Scaramucci resigned, noting that it was clear Kelly "had no confidence in him."

Sanders told reporters Monday that all White House staff will report to Kelly.

"Gen. Kelly has the full authority to operate within the White House, and all staff will report to him," she said. When pressed further whether staffers including Jared Kushner, Ivanka Trump and Steve Bannon will all report to Kelly, Sanders said: "That includes everybody at the White House."

Scaramucci, a colorful and controversial figure, was brought on during the latest in a long list of White House shake ups that have imbued the Trump presidency with a sense of disarray. At the time, Kushner and Ivanka Trump were said to support Scaramucci joining the White House, but a White House official told CNN on Monday that they supported his departure.

Scaramucci is the third White House communications director to leave the post that had been vacant since late May, when Mike Dubke left after about three months on the job. Sean Spicer, the former White House press secretary, also assumed some of the communications director role before he resigned when Scaramucci was hired July 21. In addition to Priebus, Katie Walsh, the former White House deputy chief of staff, left the administration in March, and Michael Short, an assistant press secretary, resigned earlier this month when it became clear Scaramucci was going to fire him.

Scaramucci's departure comes days after he unleashed a vulgar tirade against two top White House officials in a conversation with a reporter.

After Ryan Lizza, a reporter for The New Yorker and a CNN contributor, broke the news that Scaramucci was having dinner with Fox News host Sean Hannity and former top Fox News executive Bill Shine, Scaramucci called to try to force Lizza to give up his source.

Scaramucci suspected that Priebus was the leaker and slammed the former chief of staff.

"Reince is a f---ing paranoid schizophrenic, a paranoiac," he said, mimicking Priebus when he added, '''Let me leak the f---ing thing and see if I can c--k block these people the way I c--k blocked Scaramucci for six months.'"

And in a comment that drew consternation from even some Republican lawmakers on Capitol Hill, Scaramucci slammed White House strategist Steve Bannon, a longtime Trump adviser, for what Scaramucci considered was trying to build his own brand from the White House.

Trump thought that Scaramucci's comments to The New Yorker were inappropriate, Sanders told reporters on Monday.

"The President certainly felt that Anthony's comments were inappropriate for someone in that position and he didn't want to burden Gen. Kelly also with that line of succession," she said during the White House news briefing.

Before the New Yorker interview published, Scaramucci called into CNN's "New Day" and all but blamed Priebus for leaking information. The remarkable interview with CNN's Chris Cuomo -- which came after Scaramucci included Priebus' name in a tweet about leaking -- put the developing power struggle inside the West Wing on full display, with Scaramucci at one point warning that "the fish stinks from the head down."

"When I put out a tweet and I put Reince's name in a tweet, they're all making the assumption that it's him because journalists know who the leakers are," Scaramucci said on "New Day." "So if Reince wants to explain he's not a leaker, let him do that. But let me tell you about myself. I'm a straight shooter and I'll go right to the heart of the matter."

Despite not always being a Trump supporter, Scaramucci entered the White House as someone with a long relationship with Trump, something others in the communications shop did not enjoy. In interviews during his brief tenure as a White House staffer, Scaramucci talked up his knowledge of Trump's needs and his connection to the President.

Before becoming communications director, Scaramucci was named as vice president and chief strategy officer at the Export-Import Bank.

When asked if Scaramucci is returning to the Ex-Im bank, a spokesperson for the bank said: "We are checking into this matter."

Asked the same question, Sanders said: "He does not have a role at this time in the Trump administration," Sanders said, later specifying that Scaramucci doesn't currently have a position at Ex-Im.

But what really warmed Trump to Scaramucci was his months of being a prominent TV surrogate for the President, regularly clashing with television hosts and casting the Trump administration as a well-oiled machine.

Scaramucci, despite casting himself as a political outsider in the vein of Trump, was national finance co-chair of 2012 GOP nominee Mitt Romney's presidential campaign and later fundraiser for Wisconsin Gov. Scott Walker and former Florida Gov. Jeb Bush in the 2016 GOP primaries before jumping to Trump's campaign.