Another verdict against Smithfield Foods, but with low award 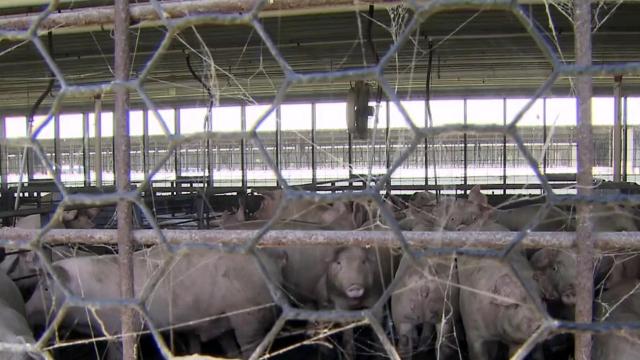 The jury awarded $102,400, split between eight plaintiffs. The awards were broken down by how long plaintiffs lived near hog farms in their area, with the highest amounts, $75,000 and $25,000, going to people who were there before the farms.

This is the fourth in a series of trials targeting Smithfield's hog division and the first one to split the compensatory and punitive phases of the case. Hog farm neighbors have complained of smells and other nuisances in lawsuits that farmers say threatens an important part of North Carolina's economy and environmentalists say may finally force changes in an industry that relies heavily on open pits of hog waste.

Past awards totaled in the millions. In the third trial, a jury came back with total compensatory and punitive damages of $473.5 million, though the cap turned the maximum award into $94 million.

The two sides are going back and forth, picking plaintiffs for the 26 cases. Smithfield Foods' legal team selected this round of neighbors.

At one point in its deliberations, the latest jury declared itself hung. Protect North Carolina Farm Families, a public relations group for the hog industry, said in a statement that the jury "made these decisions based on who was there first – the hog farm or the neighbor."

"Although technically another negative verdict for hog farmers, we are grateful and (dare we say) excited that jury members recognized that hog farms do not ruin people’s lives so much as to award millions and millions of dollars," the group said on its website. "We also appreciate the fact that those individuals who moved near a hog farm were identified and not given large sums of compensatory damages. The choice to move next to a farm should be taken into consideration in these trials, and we are glad they finally were."

The group also said the attorney for neighbors suing the company asked jurors to award $4 million to $5 million each.

"We commend the jury for taking a reasonable approach," the group said. "The claim that hog farms are a nuisance was given much doubt in this case, as seen by the jury’s difficulty in coming to a unanimous decision and because of the low awards."

CORRECTION: This post has been edited to correct the number of plaintiffs in this case, which was initially misstated.