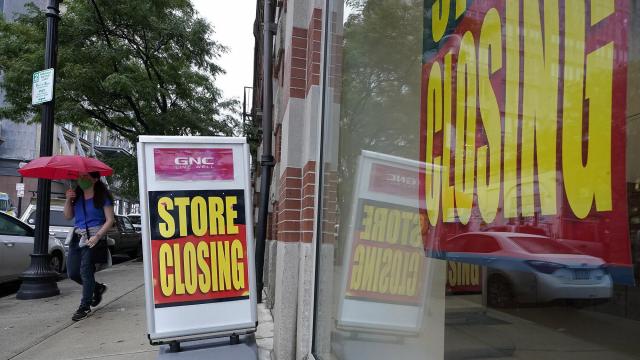 CNN — The pace of America's jobs recovery continues to slow. Another 840,000 workers filed for initial unemployment benefits last week on a seasonally adjusted basis, the Department of Labor reported Thursday.

That was down from 849,000 in the previous week, but more than economists had expected. Every person who can go back to work is a win in this crisis. But the improvement in first-time benefit claims is small to say the least, as they remain about four-times higher as they were before the pandemic.

"Let's hope we soon break below the 800k mark in initial claims soon because hanging around the 800k+ level is still not a good place to be, especially going into the winter," said Peter Boockvar, chief investment officer at Bleakley Advisory Group, in a note to clients.

The warm summer weather has been a lifeline for battered hospitality and leisure sectors, which rely on face-to-face interactions. But with the colder months beginning, pandemic normalcies like outdoor dining could fall away again, and a rise in infections could exacerbate things.

Meanwhile, California has halted the processing of its initial claims for a second-straight week to work on its benefit backlog and fraud prevention. Thursday's report includes an estimate based on previous claims for the state.

Claims for Pandemic Unemployment Assistance stood at 464,437. PUA is targeted as those workers who aren't eligible for regular benefits, such as the self-employed.

Together, regular and PUA first-time claims stood at 1.3 million last week, on an unadjusted basis.

Continued claims, which count people who have filed for benefits for at least two weeks in a row, showed a more substantial improvement, falling by about one million to 11 million. That was better than economists expected.

The steep decline in continued claims is giving Thursday's report a positive flavor, even though it at least partly reflects that workers are losing eligibility for benefits as well, said Mike Englund, chief economist at Action Economics.

State benefits only provide up to 26 weeks of aid, after which workers become eligible for certain extended benefits. One such program is the Pandemic Emergency Unemployment Compensation, which provides aid for another 13 weeks.

PEUC data lags the data on regular benefits, but in the week ended September 19, nearly 2 million people were part of the program, an increase of about 150,000 people.

In the end, millions of American workers continue to rely on government help to make ends meet. But President Donald Trump ended negotiations for a new stimulus package on Tuesday, before expressing support for some isolated stimulus initiatives, including direct checks to individuals and more money for the Paycheck Protection Program targeted at small businesses.