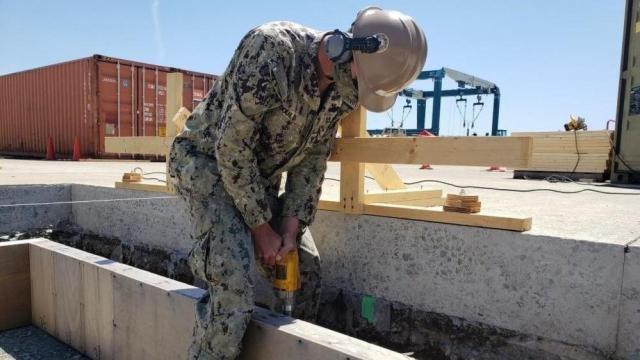 Every year, the federal government spends billions of dollars on construction and infrastructure projects. In North Carolina alone, the Department of Defense is preparing to complete over $2 billion worth of construction on military bases across the state.

While funding levels may not be quite so high in the future, there will still be consistent federal construction projects in the coming years. On the coast of North Carolina, new construction at Fort Bragg and Camp Lejeune alone will reach nearly $200 million annually.

With a wide margin of spending, there's plenty of opportunity for local construction businesses to capitalize on federal contracts. At the N.C.Military Business Center, Executive Director Scott Dorney and his colleagues help thousands of locally-based contractors, suppliers, architects, engineers, and more make connections and identify opportunities for federal contracts.

One such resource in aiding this mission is the NCMBC's annual construction summit in Wilmington. Attended by top federal agencies and construction professionals, the Summit serves as both an educational and networking event wrapped in one.

"It's a unique event because it brings together in one venue, for one day, many of the federal agencies who buy infrastructure in the Southeastern United States. That includes all of the bases in North Carolina, and a lot of the bases and agencies from Virginia, South Carolina, Georgia and Florida," Dorney said. "Anybody who wants to design, build or supply the federal construction market in the Southeast needs to be there. That includes general contractors like builders and specialty contractors — your electrical people, roofing people, drywall people, plumbing people — they should be there because they need to connect with the general contractors about working on federal projects."

By bringing together all of these major players that buy infrastructure — as well as the local businesses that can build, design, or supply materials for the federal construction market — the Summit has grown into the premier federal construction and environmental event in the Southeast region of the country.

In addition to construction, however, the Summit also highlights engineering, architectural, and environmental opportunities.

Since the NCMBC is a state agency, they aren't profit-driven, making the Summit affordable for small businesses that normally wouldn't have the budget to attend an event of this caliber is paramount.

"For us, it is a large networking event since we do a lot of federal contracting. A lot of the federal contracting is in the state of North Carolina — getting work at Fort Bragg, Camp Lejeune, Cherry Point, and Seymour Johnson," said Dan Hood, founder and president of HICAPS, a construction management company based in Greensboro. "The Summit is beneficial for us to learn about other networking partners that we can go after, and some projects that we may not have the expertise for."

Hood and his team at HICAPS have been working with the NCMBC and attending the construction summit ever since they started the business over a decade ago. As a small business owned by service-disabled veterans, Hood and his partners sought the advice of the NCMBC in securing the proper status for HICAPS, as well as forming partnerships with other small businesses in the state.

In making those connections, the annual construction Summit proved to be invaluable. In fact, Hood even recently hired a new employee that he met from years of attending the event.

"We're only as good as our partners, so to be able to go to a conference and meet other people — whether they work in concrete, structure, or are other engineers — we're able to put together a win-win team that increases our odds of being successful bidders," Hood said.

Hood's experience at the construction Summit isn't out of the norm. Chris Nesselroade, president of the design, construction, and project management firm WB Brawley, has been attending the Summit for years. For a small business like his, the connections he's been able to make have proven invaluable to the company's success.

"The Summit has opened different markets and different relationships up to us and been a conduit for teaming opportunities with other companies like ourselves. Actually, as a direct result of the Summit, we were able to meet a gentleman who's a retired colonel from the Air Force, and we've formed a relationship that has led to a joint venture that started probably five years ago and has been successful to date," Nesselroade said. "Overall it's been great for networking opportunities, all of the 700-plus federal government, DoD and business representatives at one place at one time is just tremendous — that's just not the norm, to be able to gather those high-position individuals in one location, especially just for our state."

Of course, networking is just one side of the construction summit and doesn't even begin to touch the actual programming of the event. While the conference only lasts one day, it packs a surprising punch in that amount of time.

In addition to a keynote speaker, there are also breakout sessions and various panels. Each panel is divided up by region, including North Carolina, South Carolina, Virginia, Georgia and Florida. Then, bases and agencies in those states break down what their construction projects look like for the year.

"Take North Carolina, for example. Fort Bragg will talk about their projects, and the Corps of Engineers will discuss acquisition and execution of that work. We have Camp Lejeune and we have the Naval Facilities Engineering Command, which is a Navy's counterpart to the Corps of Engineers that builds the projects for the Navy on the base, and so on," Dorney explained. "They talk about what they're building in North Carolina in fiscal year 2021, and we have a similar panel for Virginia bases and the rest of the states attending. These are joint panels that are talking about construction and infrastructure projects at the bases within those states — across all uniformed Services."

In addition to the regional panels, the Summit also features informational panels. These conversations revolve around topics like contracting and technical issues on small business utilization programs, equal employment opportunity and other HR laws that federal contractors have to comply with, and more technical construction topics.

As small businesses like Hood's and Nesselroade's have started to catch wind of the Summit, attendance has skyrocketed. In fact, when the first summit was held in 2005, attendance was capped at 200 people.

Now, with a bigger venue and a bit of notoriety, the latest event hosted 850 attendees. Since the NCMBC isn't trying to make a profit off the event, prices remain low and attendance high.

This article was written for our sponsor, the North Carolina Military Business Center