Annies Return With Their Humor Intact 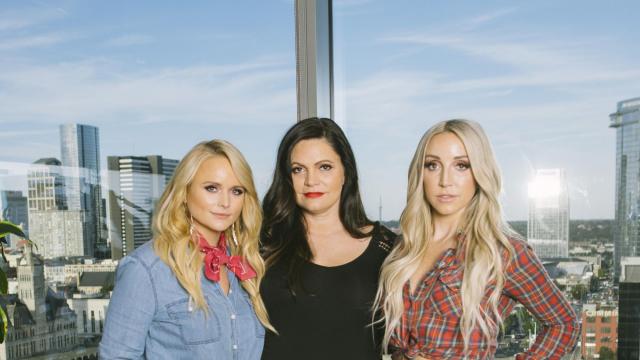 NASHVILLE, Tenn. — Standing onstage at the Ryman Auditorium last week between her Pistol Annies’ band mates Ashley Monroe and Miranda Lambert, Angaleena Presley set up the gleeful divorce tune “Got My Name Changed Back” by announcing, “This next song is not about anyone in this band.” Lambert, who has endured more than a few tabloid headlines, quickly disagreed. “She’s full of it,” she said in stronger language.

That’s the attitude that has endeared this country supergroup to its fans — the Annies seem like they’re both letting it all hang out and inhabiting personas that are larger than life. It’s been five years since the band released new music — the Ryman show heralded the arrival of “Interstate Gospel,” out on Friday — and even longer since country music was dominated by the down-home comedy and depictions of domestic troubles that are their specialties. The Annies’ priorities set them apart in the mainstream landscape: They’re far more focused on entertaining their audience, and one another, than their chart stats.

When the group quietly formed in 2010, the memory of the backlash against the Dixie Chicks — brought on by their refusal to appease country-radio gatekeepers angered by a political comment — still haunted the country landscape. New female acts seemed to be competing for a shrinking number of spots.

Even so, the Annies opted for sisterly solidarity. They’d seen how tough it could be out there alone: Lambert, 34, didn’t land a No. 1 song until her 11th single; Monroe, 32, had weathered a short-lived label deal; and Presley, 42, had struggled to give her publisher songs deemed suitably commercial.

Not that women’s prospects at country radio have improved — the percentage of songs by women in rotation dropped to 10.4 percent in 2017. Breezy flirtation from affable male acts is the reigning norm in the country mainstream, and the Annies’ style of songwriting couldn’t be further from it.

The idiosyncratic specificity and dark humor of Presley’s lyrics were what originally drew in Monroe and Lambert. (Monroe shared a few of Presley’s compositions with Lambert, which prompted an impulsive after-midnight phone call to Presley, inviting her to team up.)“I was broke and getting divorced,” Presley recalled, on a leather sofa with her bandmates in the library of their manager’s West Nashville home. “It was like a golden ticket to me.”

The trio was able to skip some of the thankless, anonymous striving that baby bands ordinarily face because Lambert, one of country’s most magnetic stars, was eager to put her connections and reputation behind the group. At first, she sprang the Annies on her unsuspecting fans by inserting unannounced sets in the middle of her shows.

Soon, people began cheering at the sight of their three customized mic stands — for “Hippie Annie” (Monroe), “Holler Annie” (Presley) and “Lone Star Annie” (Lambert) — being carted onstage. The momentum kept building, through high-profile appearances and two well-received albums, “Hell on Heels” in 2011 and “Annie Up” in 2013, until the trio abruptly canceled a headlining tour.

“It was a lot really quickly,” Lambert said. “I feel like we were just all running a hundred miles an hour. You can’t do that for that long, you know? You’ve got to sort of take a breather, go find yourself solo again and get married, get divorced, have babies, whatever you’re doing.” Presley chimed in with a far-fetched claim: “We slept with each other’s husbands.” The others hissed in mock exasperation, as if she’d revealed a shameful secret, then joined her in inventing tales of rehab stints.

The Annies’ reunion was spurred by a text from Lambert with a song idea. Within minutes, Presley and Monroe responded, adding verses, and the team writing accelerated from there. A few days before they were scheduled to take the new material into the studio to record, Presley discovered that she was pregnant with her second child, a development that would affect promotion plans for the album. But the other Annies don’t view this as an unwelcome disruption.

“I couldn’t be more thrilled,” said Lambert, “No. 1 because she’s having a baby and she wants a baby. And No. 2, it’s perfect for our vibe.”

When Presley had to walk around in 6-inch, leopard-print heels at a video shoot, her band mates rubbed her feet between takes. On the Ryman stage, the three played up the humor of Monroe and a very pregnant Presley executing the scuffing dance steps of Appalachian clogging while Lambert scraped syncopated rhythms on a washboard. The Annies reel off the markers of experience they’ve accumulated — solo careers, husbands and ex-husbands, kids and a baby on the way — the way other musicians might highlight career triumphs. Where their first two albums crackled with the irrepressible excitement of kindred spirits finding each other, “Interstate Gospel,” arriving further along on their journeys, sprinkles the escapades of their salty personas (“Stop Drop and Roll One,” “Sugar Daddy”) among patient insights about profound disappointments.

The subdued doo-wop tune “Masterpiece” expresses mortified awareness that an idealized image of a marriage is shattered. “Commissary” captures an excruciating display of restraint toward an incarcerated loved one’s addiction. The elegantly bruised ballad “Best Years of My Life” shows a woman coping with the realization that she’s settled for a stable yet deeply unsatisfying life.

Patty Loveless, who had considerable success with her grounded approach to country neotraditionalism during the 1990s, likened the Annies’ appeal to Loretta Lynn’s popularity with women in the ‘60s. “They said, ‘Hey, Loretta is speaking to us,'” she said. “It’s almost like a conversation of friends, friends getting together and talking about issues.”

Annies songwriting sessions tend to take the form of sleepovers, with Presley and Monroe bunking at Lambert’s ranch outside of Nashville or riding her tour bus, where they commiserate and collaborate in a way that they find empowering. “I wouldn’t be confident enough to say some of the things alone,” said Lambert, who has never been timid in her own work. She offered the example of “Milkman,” a wistful, fingerpicked reflection on a mother and daughter’s misunderstanding of each other’s desires that opens with Lambert singing, “If mama would’ve loved the milkman, maybe she wouldn’t judge me.”

In certain arrangements, the lead part is delegated to a single, harmony-supported voice, be it Lambert’s tart timbre or Monroe and Presley’s willowy and reedy textures. In others, the verses are divvied up. Either way, the Annies’ share in the ownership of their lyrics’ disclosures.

They do, however, keep their work close to the vest until they’re ready for their managers and label to hear it, so great is their belief that insulating their partnership from outside pressures is what keeps it fun. “I think we all hold this pretty sacred,” Monroe said, “and don’t ever want it to be forced.”