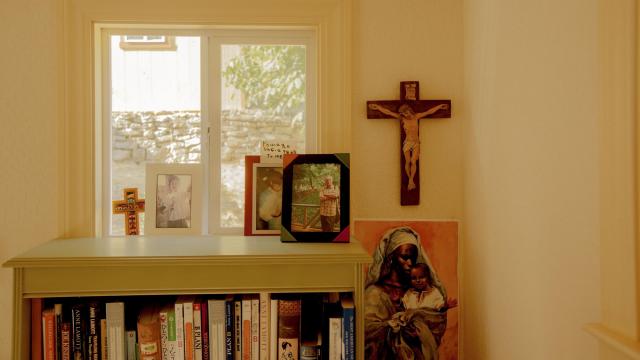 FAIRFAX, Calif. — Anne Lamott thought “Doomed” was a pretty good name for her latest book, but it was a hard sell to the powers that be at Riverhead, her longtime publisher, so she settled on a less apocalyptic title, one she couldn’t quite remember on this bright Northern California afternoon. “Something … Anything?” she said.

Not quite. “Almost Everything: Notes on Hope,” out last week, is Lamott’s 18th book — and 15th best-seller — and her ninth collection of mostly spiritual essays. Like a feminist C.S. Lewis, she talks about God, politics and other unmentionables, and gently exhorts her readers, as she does herself, to find joy in a bleak and chaotic world: a leftie guru of optimism. (Though as she notes, finding joy these days is a radical act.)

“Assad is in really good health,” she said. “He’s thriving. Please explain this to me. Another one of the things I wanted to say in my,” she paused again, “new book that I can’t remember the name of, is that everybody is screwed up and thinks they’re a fraud and you don’t know that until you’re in your 40s, so I want to tell you now so you don’t keep comparing your insides to their outsides. I think I already wrote three books like this, but they were an accident, you have to believe me.”

Lamott was stretched out on an enormous sectional sofa in the newly renovated Spanish Colonial she shares with Neal Allen, her boyfriend of two years. She was sandwiched between two canines, Lady Bird, who is large and baleful looking, and Gizmo, a twitchy Chihuahua-terrier mix who belongs to her son, Sam.

Lamott has huge green eyes, short blonde dreadlocks and on her left ankle, a tattoo of a rose of Sharon with the words, “Trust the Captain, trust the Crew,” written on its stem. It’s a line from “The West Wing,” and she acquired it during the dark days, she said, of “Bush-Cheney, first term." “Hippies Use Side Door,” proclaimed an ersatz vintage sign near the front door. Nesting in the driveway was a pale green 1959 Volkswagen Beetle, a gift Lamott bestowed on herself for her 60th birthday. “I knew everyone was going to disappoint me,” she said.

Kindly and self-skewering, Lamott, now 64, has been doggedly chronicling the messy stuff of life — refracting her own complicated stories of addiction and loss — in mordantly comic and sharply observed memoirs and novels for over three decades. But she did not plan on a career as an inspirational speaker and author.

She draws thousands to bookstores like the Tattered Cover, in Denver, one of the many stops on her book tour this month. Only Madeleine Albright, said Mikaley Osley, the store’s events manager, has pulled in as many people this year. Fans bring her gifts, like socks printed with the face of the Virgin of Guadalupe, and M & Ms, knowing of her weakness for them, and which, she said, “Neal and I eat like dogs back in the hotel room.”

Lamott aphorisms now blanket the internet, on Pinterest boards, blogs and a Twitter account, Anne Lamott Quotes, set up by Dean Dauphinais, the father of a recovering addict who found Lamott’s words like an elixir, he said recently. You can see how Lamott might forget a book title or two, given the regularity with which she delivers a new collection. Bound in Easter egg colors with sparkling celestial graphics and interchangeable subtitles, the books have branded their epigrammatic author into a tidier, more wholesome package.

She has been giving TED-like talks in book stores and churches for years, long before that fame-minter was invented. Her actual TED Talk, in 2017, has been viewed more than 2.8 million times. Lamott has her own Twitter feed, and a rollicking community of mostly supportive followers, though the occasional troll will gripe about her left-leaning politics or her stance on abortion. “Every other day I get something hostile about my face, or my politics or my enthusiastic baby killing,” she said, noting that she has been told more than a few times that she will burn in hell. "The rule on Twitter is you can disagree with me, but if you are an idiot, I will block you."

At 35, Lamott was a well-regarded novelist with a Guggenheim to her credit, three years of sobriety and a passionate faith — she was hooked by the gospel music, and social justice sermons, coming out of a tiny Presbyterian church in Marin County — when she had Sam. Her memoir, “Operating Instructions: A Journal of My Son’s First Year,” out in 1993, recounted Lamott’s life as a single mother with a colicky baby, not much money and a dying best friend. It was very, very funny, and laid out some hard truths that veered sharply from the Hallmark version of motherhood. It became a touchstone for many new mothers. She wrote of circumsizing Sam for aesthetic reasons, noting that in her experience the uncut unit, as she put it, looked sort of marsupial, perhaps like a rodent trapped in a garden house; the umbilical cord, when it fell off, reminded her of something the cat might get stuck in its tail; and she wrote, marvelously, of wishing she could just put the baby out on the porch for one night. “Nicely bundled up, of course,” she said. “I talked about the rage that you experience when you’re beyond zebra exhaustion and you realize you don’t like children.”

“Operating Instructions” was her first best-seller. The title of her second, “Bird by Bird: Some Instructions on Writing and Life,” came from the advice her late father, Kenneth Lamott, a well-known writer and editor who died of cancer when he was 56, gave her older brother when the boy was in fourth grade, and paralyzed by a school report on birds. “Bird by bird, buddy,” the elder Lamott famously said. “Just take it bird by bird.”

Anne Lamott was an anxious child, twanging to “the vibrational intensity,” as she said, of an unhappy family; bedeviled by tics and migraines, she found respite in humor and chapter books. She was the family’s canary in the coal mine, not that anyone got out unscathed. Both her brothers suffered from addiction, too.

“I don’t write stuff I don’t think is universal,” she said, “if I write about my butt or my body or my, you know, challenges with self esteem or my raging ego, I know it’s universal. I mean, some people go, ‘Really? That’s sick. You should get help instead of writing about it.'” When Sam’s girlfriend got pregnant — “which was not my plan for him,” Lamott continued — mother and son wrote “Some Assembly Required: A Journal of My Son’s First Son.” It, too, was a best-seller. (Jax is now 9, and lives half the time with his dad and Lamott.)

Sam, 29, is an artist who is also in recovery. He is the founder of How to Human, podcasts about “ordinary vulnerable humans,” as he put it, and he has the family motto — “We never give up” — tattooed on his forearm.

“Do you want to hear Neal’s story, since he has wandered cutely in?” she said as Allen, a tall, bearded writer and former newspaper man, appeared.

A little over two years ago, Lamott was poking around Our Time, the Match.com spinoff, when she noticed Allen’s photo and swiped it. She had forgotten she had rejected him a few weeks earlier, after a few texts revealed that he was allergic to cats. “My cat was my life, so that wasn’t going to work,” she said.

When Allen pointed out she had already rebuffed him and promised an allergy remedy (Brewer’s yeast in the kibble) Lamott agreed — “with enormous bitterness,” she said — to have a cup of coffee. They were oddly incurious about each other. Lamott didn’t know Allen’s last name, but she knew he was a writer and feared that he, like many of her suitors, would make her read a manuscript. For his part, Allen had read exactly one thing Lamott had written, an essay about her hapless year on Match.com (“Your politics are abhorrent to me,” one date told her.)

“I was worried she was going to be a bad writer,” he said, incredibly. (There is no longer a record of her online profile, but Lamott described it as “short and hostile.”) Allen had also, he said, “projected a kind of fierce defensiveness on her, so I was intrigued and a little intimidated.”

The short version of this story is that the two have barely been apart since that day. “It was never about wooing or scoring or all the things dating is supposed to be about,” said Allen, who had been married twice and has four grown children. “We just started chatting and we never stopped.”

Last summer Lamott, who has had her share of relationships — “some that would curl your hair,” she said — and managed to avoid living for too long with any of them, found herself renovating a house and moving in with Allen. “It was an accident,” she said.

About the cat: The Brewer’s yeast did the trick for Allen’s allergies, but when the couple traveled to Europe in July, the cat, whose name is Gringo, ran away.

One night in August while they were watching the U.S. Open, Allen turned to Lamott and said, “Can I ask you a question?” Lamott was pretty sure he was going to ask her what kind of gravel they should put down in the car port. Instead, he asked her to marry him.

“You kind of looked like I was punking you,” Allen said, “And I said, ‘You don’t have to. If you don’t want to, we’ll just go on living this life that I love.'” The two had never discussed marriage before, and Allen said he had no idea what Lamott’s views were on the subject. And yet, he said, “I felt like I couldn’t lose, either way. It wasn’t like I was depending on an answer, but I did have a ring.”