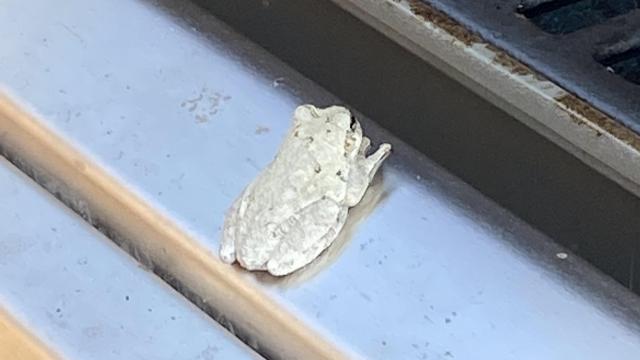 The Carolinas have been seeing a lot of animal oddities this summer. Just two days ago, volunteers discovered a two-headed baby sea turtle in Edisto Beach State Park. Earlier in July, a rare, white deer was seen in Raleigh.

Now, a local woman has found a white frog outside her Garner home.

Maureen Stilwell said she took the cover off her grill and saw the strange white frog beneath.

"I've never seen a full white one," she said.

According to descriptions and photos, it seems to closely match the Gray Treefrog, known as Hyla versicolor, which may range in color from gray to green to brown and is acutally pretty common in North Carolina.

According to NC Wildlife, there are two types of gray treefrogs: The common gray treefrog and the Cope's gray treefrog. They look very similar, and are often distinguished by their breeding calls.

"Cope's gray treefrogs are widespread throughout most of North Carolina. Common gray treefrogs have been documented only in Warren and Caswell counties," reads the website.

Both species are able to rapidly change colors -- from gray to brown to greenish or nearly white.