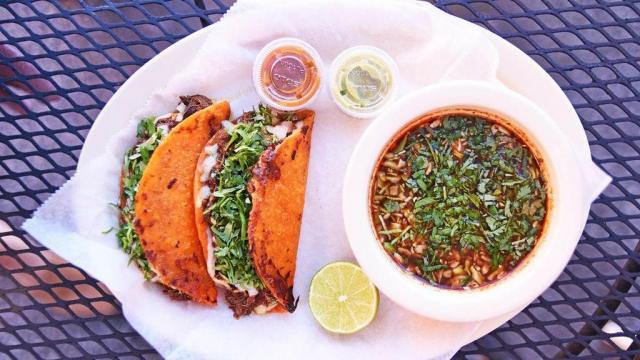 Born and raised in Washington, N.C., 23-year-old Sergio Higuera Dominguez fondly remembers a childhood filled with food. His mother, who stayed at home during the day, would often cook meals inspired by her home in Sinaloa, Mexico, sharing the dishes with family friends — quickly gaining a reputation around town for her authentic flavors.

After seeing the joy cooking brought his mother, Higuera Dominguez found himself wanting to pursue a career in the culinary world — and in doing so, help his mom share her talent, as well.

"I'd always worked in restaurants. I've been a server, I've been a dishwasher, I've been a cook. When this storefront opened up in downtown Washington, it was an opportunity we couldn't pass up," said Higuera Dominguez, manager and co-owner of the restaurant. "Everything we put on the plate is how we cook at home, essentially. We follow the specific style of cooking from where our family is from in Mexico, and it's a little different from all the Mexican restaurants around here in town."

Since opening in October 2019, Angi's has received rave reviews from Washington locals and visitors alike. In keeping with their down-to-earth personality, the restaurant regularly posts specials and photos of the latest menu offerings on their Facebook page, from fresh mole with a side of rice to an overflowing plate of tacos de papa.

It's not just the staples on the menu, though — some of the most popular dishes at Angi's include their ceviche and auguchile, the latter of which is made by soaking shrimp or fish in lime juice, red onions, and spices. For those with a sweet tooth, Higuera Dominguez and his team also serve up Mexican desserts like coricos, a crumbly cookie that pairs well with coffee, and caramelized sweet potatoes. When summertime rolls around, the restaurant makes special batches of helados, made by blending up everything from strawberries to Oreos, then freezing the mixtures to create homemade popsicles.

No matter what's on the menu, authenticity is always a key ingredient.

"We try to, as best as we can, make a homemade meal on a plate. We want to serve it in the same style as you would expect if you were going over someone's house for a meal, so a lot of people that come in know what to expect," said Higuera Dominguez. "I always thought that was going to be the hard part — people were going to come in and expect us to have the most standard stuff — stuff that isn't necessarily authentic. We want people to enjoy actual, authentic Mexican cuisine as if they were eating in a Mexican home."

Since the restaurant opened last October, the team wasn't able to experience regular operations for long. COVID-19 threw a wrench in their plans just a few months after opening, but thanks to some creativity and support from their customers, Angi's has been able to thrive.

In fact, the restaurant's Facebook page has already garnered over 1,500 likes and five-star reviews across the board. For Higuera Dominguez, that vocalized support from the community has been invaluable.

"We aren't super tech-savvy, so we really relied on the community. The people that supported us from the beginning kept coming in to get takeout plates, then they'd take pictures, post it, and tag us," said Higuera Dominguez. "The biggest thing around here has been word of mouth — if people are talking about it, and they say it's good, that brings you business. We've really been able to depend on the community."

In bringing their authentic Mexican flavors to downtown Washington, Angi's has become the latest locally owned restaurant that gives locals and visitors alike a taste of what Washington has to offer.