SERGE SCHMEMANN: Angela Merkel was underestimated, and it became her superpower

EDITOR'S NOTE: Serge Schmemann is a member of the New York Times editorial board. He has worked as the bureau chief in Moscow, Bonn, Jerusalem and at the United Nations. He was editorial page editor of The International Herald Tribune in Paris from 2003 to 2013.

Almost every article written about Angela Merkel’s tenure as Germany’s chancellor notes that one of her greatest political strengths has been that she is so often underestimated. In this, she is not unique: Helmut Kohl, who launched Merkel into politics and spent even more time in the chancellor’s office, once declared, “I make my living by being underestimated.”

There are many differences between Merkel and Kohl — she came from a Protestant family in Communist East Germany, he from the Catholic Rhineland; she was a serious scientist before entering politics, he a politician almost from the get-go. But it is a reflection on modern German politics, and on Germany’s place in the world, that through more than 30 tumultuous years — years in which Germany and the world were radically reordered — the country was led by two conservative leaders who made a virtue of being decidedly uncharismatic in style, demeanor and speech.

This may be in part because Germany’s Nazi past has discouraged demagoguery, passion and self-aggrandizement in politics. Whatever the reason, it has worked for Germany. Though Kohl exited from politics under the cloud of a political-funding scandal — an exit for which Merkel, his erstwhile protégée, gave him the final push — the world has assigned him a firm place in history as a statesman who played a central role in the peaceful reunification of Germany and Europe.

Merkel, widely regarded as the real leader of Europe and as the most powerful woman on earth, is already gathering even greater laurels. To be sure, serious questions continue to hover over her tightfisted approach in the eurozone debt crisis, her refusal to scuttle the Nord Stream 2 pipeline from Russia, Germany’s continued reluctance to raise its military spending and her failure to take serious measures against the rise of authoritarian populists in Central Europe.

But when millions of Syrians began fleeing their war-ravaged land for the safety of Europe, Merkel refused to close the doors. “Wir schaffen das” — the German equivalent of Barack Obama’s “Yes we can” — was her characteristically colorless way of countering fears of the wave of asylum-seekers, a phrase that became a sort of motto for her leadership.

There will be many more assessments of her 16-year reign after the elections Sunday that will determine her successor, and of what follows, and many will focus on the uncertainties facing German and European politics in the post-Merkel era. The Economist wrote about “the mess Merkel leaves behind”; The Guardian’s view of the Europe Merkel is exiting was “problems managed, not solved”; The Wall Street Journal’s Germany correspondent writes that her international legacy will be “cooler trans-Atlantic relations.”

Yet in a time when America’s democracy seems paralyzed by profound polarization, when elected leaders in many Western democracies are held in disdain and autocrats are on the rise, there might be value in also looking at what it is that has enabled Merkel to enjoy consistently strong approval ratings and for Germany to enjoy a high degree of prosperity and political harmony under her stewardship.

Part of it is the genuine political skill concealed behind Merkel’s lack of interest in the trappings of power. Her demeanor may be that of a naturally modest woman raised in a Protestant home in a police state, and her nonconfrontational style may be a response to having to function in a conservative, male-dominated political party. But pity those who have mistaken her blandness for weakness, or her quiet for lack of calculation.

Friends say that in private she has a sharp sense of humor. She does her homework with a scientist’s dispassionate focus before negotiations or meetings, and she never flinched before the crude macho antics of adversaries like Vladimir Putin or Donald Trump. The photo of Merkel, with the leaders of the Group of 7 ranged behind her, staring fiercely at a seated American president is an icon to resistance to the bombastic Trump. 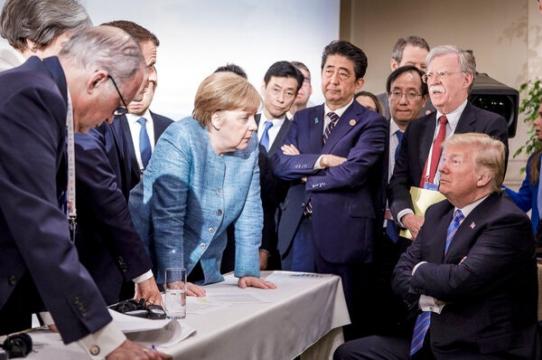 After Putin, knowing that Merkel fears dogs, deliberately summoned his black Lab into the room where they were meeting, she offered a biting explanation: “I understand why he has to do this — to prove he’s a man. He’s afraid of his own weakness.”

That is one of Merkel’s very few quotable quotes, but that’s not for lack of things to say. A few years ago she explained in an interview that she simply never believed that “a person can touch other people so much with words that they change their minds.” Accordingly, she has always focused more on actions than words. She almost never gives interviews to foreign news outlets, and those she gives the German media are rarely exciting. She has never supplied the tabloids with even a hint of scandal.

These traits of honesty, modesty, discipline, persistence and reserve would seem almost quaint elsewhere, in New York City, say. But when someone facing almost insurmountable political odds — as a woman, an East German and a scientist — rises to the pinnacle of German power and stays there for four terms, there’s something for America and other democracies, where decent people are increasingly shunning politics, to learn and emulate.

Merkel’s tenure has not been not flawless, and the Germany she bequeaths to the next chancellor, who may not be known for weeks, will continue to bob warily in a world of perpetual crises. Her real legacy is the evidence that effective politics need not mean shedding humanity or steadfastness, and that being underestimated may be the true key to political longevity.