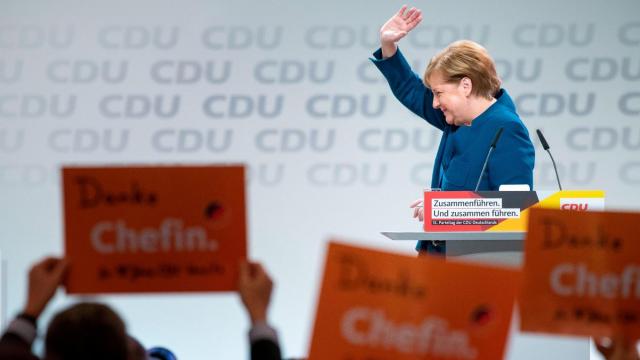 She likely will lead the CDU into the 2021 federal elections and could become the country's next Chancellor.

Kramp-Karrenbauer is said to have a similar style to Merkel: soft-spoken but determined and pragmatic, with a record of finding political solutions.

Rather than outlining her own party vision during her campaign, AKK went on a "listening tour" across 16 German states, talking to voters and party members. The tour included an overseas excursion to the US to visit White House officials and a BMW plant.

That strategy may have won her support among CDU members who wanted the familiar stability of Merkel. But it could have alienated party voters who wanted something new and different.

The 56-year-old general secretary of the CDU narrowly won the party contest over corporate lawyer Friedrich Merz with 51.75% of the vote.

As Merkel's handpicked successor, Kramp-Karrenbauer is a likely ally for Merkel, unlike Merz, who was once sidelined by Merkel in the 2002 leadership contest and sits on the right wing of the party.

In a pointed speech to delegates prior to the vote, Kramp-Karrenbauer was keen to distinguish herself as a leader who stands on her own.

"I have read a lot about what I am and who I am: 'mini,' a copy, simply 'more of the same.' Dear delegates, I stand before you as I am and as life made me and I am proud of that," she said.

"I learned what it is to lead -- and above all, learned that leadership is more about being strong on the inside than being loud on the outside," AKK added.

In her victory speech, Kramp-Karrenbauer thanked everyone for their ''support and trust."

'A future full of challenges'

As the party prepared to elect a new leader earlier on Friday, Merkel defended her 18 years in charge of the CDU.

Merkel, who announced her intention to step down as party leader but remain as Chancellor in October, gave a staunch defense of her tenure in an emotional speech that was met with a 10-minute standing ovation from delegates inside the auditorium in Hamburg.

Speaking ahead of the leadership vote, she told the party's congress that the CDU must "look forward" but remain loyal to the values that have long been fundamental to its electoral success.

''This is a future full of challenges," Merkel said while addressing the rise of nationalism, hybrid warfare, the rise of fake news and Brexit, in particular.

"Our CDU is different today than it was in 2000, and that's a good thing because the CDU of the year 2018 has the claim to look not in the past, but in the future: with new minds, new structures -- but with lasting values."

Merkel's decision to leave the role came after a difficult period of her tenure. The cracks began to surface earlier this year as she repeatedly clashed with Interior Minister Horst Seehofer over immigration.

Then, in August, Germany was stunned as right-wing extremists hijacked public anger over the killing of a man in Chemnitz in the east of the country. Young men were photographed giving brazen Nazi salutes next to protesters railing against Merkel's migration policy.

The final blow was the combined result of regional elections in Bavaria and Hesse, which showed that normally centrist voters were fleeing to the fringes, whether to the left-wing Greens or to the far-right Alternative for Germany (AfD).

Although Merz, a bold speaker, had been missing from the political scene for some time, he took 48.25% of the vote, demonstrating support of heavyweight backers, including Bundestag President and CDU elder Wolfgang Schäuble. Merz had left politics in 2009 to work with BlackRock, the world's biggest asset management company.

Merz had promised to "halve" the number the of voters leaking to the far-right AfD party by talking tough on immigration and had advocated for greater European Union integration. On the campaign trail, he even seemed to question the right to asylum, but quickly corrected himself.

Health Minister Jens Spahn -- a critic of Merkel on immigration -- was also in the running in the first round of voting, though at 38, he was considered by many too young for the job.