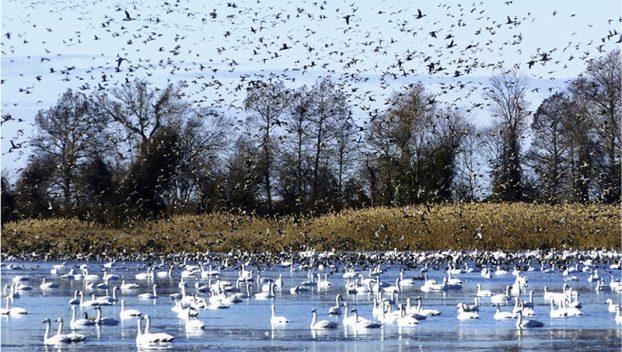 Like North Carolina’s human communities, birds are feeling the impacts of rising temperatures and more extreme weather across our state. According to Audubon’s scientists, nearly 170 North Carolina bird species are at risk because of these dramatic changes to our climate.

The good news is we already know what is needed to tackle the problem and we have many of the tools to make it happen. What’s missing is the will to get it done.

With that in mind, Duke Energy’s announcement last week that the utility is targeting net zero carbon emissions by 2050 is encouraging. The company plans to reach this ambitious goal by, among other things, doubling solar, wind, and other clean energy production by 2025, as well as accelerating the shut-down of its inefficient coal plants.

This is a hopeful message from the nation’s largest power company and should be emulated by other utility and industry leaders. But as with any aspiration, goals need to be followed by action and the details of how we get there are important.

For Duke Energy to achieve its vision, the utility must collaborate with stakeholders to create new state policies that can attract clean energy companies and encourage innovation, driving down energy costs in the process. Part of that conversation should include natural gas and how to avoid locking us into fossil fuel infrastructure that could quickly become outdated as the state transitions to widespread use of clean energy.

To think that Duke Energy and stakeholders can reach agreement and common understanding isn’t pie in the sky thinking. In North Carolina, we know it works. Bipartisan energy policy passed in recent years has led to a reduction in emissions and an explosion in clean energy growth, driven by private sector innovation.

North Carolina’s Renewable Portfolio Standard and the creation of a new competitive marketplace for large-scale solar are just two instances where Duke Energy and stakeholders have been able to find common ground.

The result: Today, North Carolina is second in the nation in solar production. Growth in solar and other clean energy industries has generated more than $28 billion in economic impact in the state and created tens of thousands of jobs along the way.

Collaboration on new energy policy was key to this progress, and it will be crucial again if the utility is going to meet its net-zero emissions goal.

Unfortunately, recent history shows that the utility isn’t playing well with others. Duke Energy largely ignored the clean energy and conservation communities during this year’s legislative session in their efforts to pass Senate Bill 559.

The bill – currently stalled in the House with an uncertain prognosis – would make it easier for the utility to increase profits on large spending plans, reduce opportunities for public input on rate increases, and could slow North Carolina’s transition to clean energy. Given the uncertainty of the bill’s impact and the lack of a stakeholder process to help shape it, Audubon and many other organizations were left with no choice but to oppose the bill.

Duke Energy’s “go-it-alone” approach needs to change. Although time consuming, genuine and constructive dialogue between the utility and stakeholders is the only way to pass meaningful energy policy in North Carolina.

By working together on forward-looking clean energy policy, reforms that Duke Energy has proposed could begin to make more sense. Take SB 559, again, as an example. The bill – which allows Duke to seek larger, longer-term spending plans – makes more sense if appropriate guardrails are put in place to ensure that the utility’s spending saves customers money and makes our energy mix cleaner over time. But those guardrails are only possible if Duke Energy lets others into the conversation.

Duke Energy has said it’s prepared to do what it takes to achieve their commitment to net-zero emissions — now we must hold them to that goal and challenge them to change the way they engage with others in that vision.