And for His Next Trick, Hopping Genres 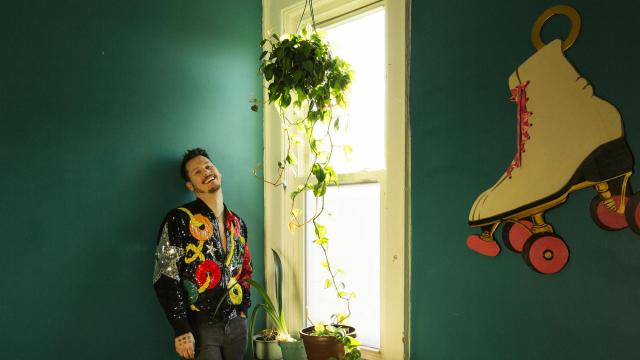 NEW YORK — In January 2011, the musician Dane Terry packed up his earthly possessions and drove from his native Ohio to New York, reaching his destination in a blizzard. “I parked my car with all my things in a snowbank,” he said. “When it melted out, I sold it.”

Selling your car is a true sign you are here to stay, and Terry has since embedded himself in a downtown scene that joyfully straddles the worlds of theater, pop music, performance art and cabaret. The 34-year-old (“I don’t lie on my Grindr profile,” he quipped) has appeared at genre-hopping venues like La MaMa and Joe’s Pub, and his new musical show, “Jupiter’s Lifeless Moons,” running Jan. 12 to 17 as part of the 13th Annual Coil Festival, is helping reopen Performance Space 122.

Growing up in Columbus, Terry wanted to be a magician. “I was interested in the idea of performing tricks, but what I actually wanted was real magic,” he said at a cafe in Park Slope, Brooklyn, a few subway stops from his home in Kensington. “When I found music, I realized that was the closest thing you could get.”

At age 12, he taught himself to play the piano, practicing for hours on end, and at 17, he started making money noodling away in lounges and at weddings. In his 20s, he toured the country with his friend Jordan O’Jordan, playing punk basements and DIY venues, and he has recorded a handful of albums and EPs.

Yet when this admirer of Jerry Lee Lewis-style boogie-woogie and musical narrative à la Laurie Anderson moved to New York, he joined the theater community. “The music people in New York, I think, still don’t know who I am, largely,” Terry said, not sounding regretful in the least.

“Jupiter’s Lifeless Moons,” which also features three guest musicians, is Terry’s most narratively structured outing yet, with a plot inspired by his stay in Cleveland last winter. (The show will be expanded into a multi-episode podcast for Night Vale Presents.) It is also the first time Terry has worked with a director, Ellie Heyman.

“Dane gets these ideas, and they sort of bubble up from his unconscious,” Heyman said by telephone. “They are like these icebergs that seem totally separate from each other, and then he finds out they’re actually related. This piece was created largely through the iceberg process.”

Terry was more blunt: “She’s pulled this thing out of my throat.”

Like peers such as Molly Pope, Erin Markey and Heather Christian, Terry often starts off with autobiographical tidbits (his debut full-length show from 2015, the chatty song cycle “Bird in the House,” drew from his childhood), which he often distorts through a fictional lens. A big inspiration is an old-timey kind of science fiction, from back when the genre was not dominated by its dystopian strain.

“Every time I start writing something, I’m like, ‘This is going to be set on a moon base!'” Terry said. “I always think I’m doing hard sci-fi, but I always come back to a person in a house. It grounds the story in humanity.”

Tellingly, Terry hopes for a future as full of promise as the optimistic space operas of yore. “I welcome anything that gives me an opportunity to do something that I haven’t done or that augments my skill set,” he said, then quickly edited himself. “'Skill set’ sounds so professional. That makes me more of a more potent magician.”