Thanksgiving tradition that started with an errant text carries on, although on smaller scale 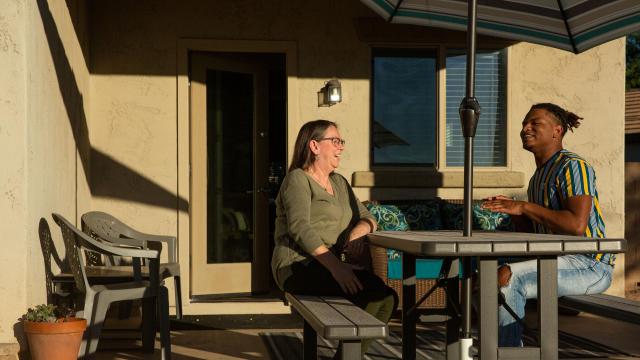 Four years ago, Wanda Dench didn’t know her grandson had changed his phone number when she invited him to her house for Thanksgiving dinner at 3 p.m. sharp.

First there was confusion from the apparent stranger on the receiving end of the text, then an exchange of selfies.

“You not my grandma,” texted Jamal Hinton, then a 17-year-old high school senior. “Can I still get a plate though?”

Thus began a holiday tradition that has charmed the world. Hinton tweeted photos of their exchange, promptly drawing the internet’s attention; Dench received so many requests for plates that year that she had to change her number. A few weeks later, Hinton took Dench up on the offer, and the pair and their families celebrated that Thanksgiving together — and each one since.

Their holiday tradition has drawn attention every year, and Dench even has an entry as “Thanksgiving Grandma” at KnowYourMeme, the online database of the internet’s favorite moments. So when her husband, Lonnie, died of the coronavirus in April, it, too, made headlines around the country.

This year’s holiday will be different for Thanksgiving Grandma, as it will for millions of other people. Dench and Hinton weighed the risks of holding a Thanksgiving celebration during the pandemic. They wondered if they could find a way to celebrate together early in the day, before splitting off to see their respective families, but decided the risk of spread was too great.

With cases rising, states' officials and health experts have urged people to scale down their Thanksgiving celebrations; this week the Centers for Disease Control and Prevention urged Americans to stay home. The director of the Arizona Department of Health Services said she expected to see a “significant increase” in the number of coronavirus cases after Thanksgiving, and the state, like others, has urged people to limit the number of guests, physically distance from one another and wear masks if they are going to celebrate even a modest holiday.

Instead of a large multifamily event, Dench and Hinton held a small dinner on Friday, where they gave thanks and talked about their friendship and Lonnie Dench’s death, Wanda Dench said. During their meal, they kept a burning candle and portrait of Lonnie Dench in front of his seat at the table.

“It’s going to be different, my first Thanksgiving without him,” she said. “My husband was always right behind me, telling me how proud he was of Jamal and me for what we’ve done.”

‘You Can Be Family With Anybody.’

Dench and Hinton’s chance encounter in 2016 blossomed into a deep friendship. They met up for frequent double dates, accompanied by Lonnie Dench and Mikaela Grubbs, 21, Hinton’s girlfriend. The couples once spent four hours at a barbecue restaurant laughing and talking about “everything imaginable”— their lives, jobs, favorite music, movies and the possibility of life on other planets, Dench said.

“After meeting her the first time I just knew, she’s another person, age is really just a number,” Hinton, who is now 21 and works as a car salesman, said of Dench. “It doesn’t matter, you can be friends with anybody, you can be family with anybody.”

Hinton, who said he had aspirations of becoming a sports agent, started a YouTube channel after his rise to fame, where he occasionally chronicles his life with his girlfriend, including some cameos by the Denches.

Their Thanksgivings have usually been spent at the Dench home, but last year — the one Dench recalls as her favorite — they spent the day with Grubbs’ family. “Gosh it was just a whirlwind of fun,” she said.

Dench met her husband when she was 20 and living in Idaho, an encounter she considers love at first sight, she said. They married a year later and had a daughter, in addition to two children from her previous marriage. They settled in Arizona to escape the cold and doted on their six grandchildren and two great-grandchildren.

“He was always true to himself,” she said. “He was the person I wanted to be like.”

Hinton said Lonnie Dench was always the first to pull people in for a hug or insist on a group picture. When the Denches upgraded their phones, Hinton spent the day helping to set them up. Afterward, he said, Lonnie Dench excitedly texted and called him to show him it worked.

“I always remember Lonnie looking at the bright side of things,” Hinton said. “He would want us to celebrate his life instead of hating COVID and hating everything.”

A Holiday Season Filled With Grief

As more than a quarter of a million people in the United States have died from the coronavirus, a collective grief has swept the country. In many households, the loss is personal and tangible: an empty seat at the dinner table; silence in moments once filled with conversation; confronting a holiday season emptier than those that have come before. The first holiday after a loved one has died can be difficult, said David Kessler, a grief expert based in Los Angeles and author of the book “Finding Meaning.”

In March, Kessler started an online grief group that quickly grew to 20,000 members who had lost parents, partners and children. Some were alone for the first time in decades, cut off by the pandemic from the type of community support that can help people process grief, like neighbors dropping off a casserole or a friend stopping by to just sit.

The Denches both became ill with the coronavirus in the spring. Lonnie Dench died on April 5, with his wife of 42 years at his side.

The day after Lonnie Dench died, Hinton and Grubbs brought Wanda Dench takeout from their favorite barbecue restaurant. They also brought some puzzles and a flash drive filled with well wishes from fans around the world, strangers who told her they had her in their prayers and how she and Hinton had inspired them.

A Bit of Joy in a Harsh Reality

Four years ago, when Dench and Hinton first met, the country was going through a similarly turbulent time during an election year with heated racial tension, Hinton said. He thinks their texts offered a holiday reprieve from a harsh reality.

“It was something to show everybody, ‘Hey, we’re all still human, we’re all still together and we can all be friends,’” he said. He said he hoped the same message carries weight today. Both Dench and Hinton think of those first texts as an act of fate. Hinton’s friendship helped her see light in times of darkness, Dench said.

“I’m just grateful that we are here, we are together,” Hinton said. “I don’t know what I would be doing for the holidays this year, last year or years before if I didn’t have Wanda in my life, so I’m just grateful.”