An Indonesia Quake Buried Him in a Mosque. He Dug Out with a Chunk of Debris. 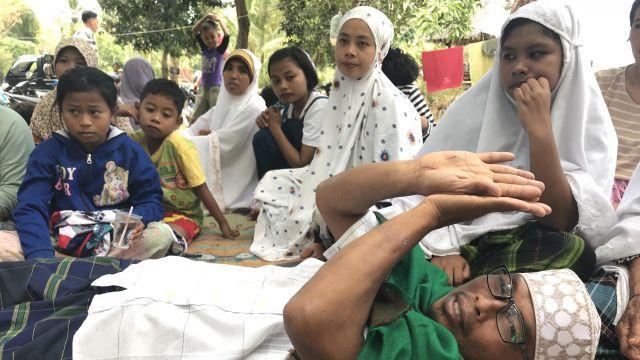 LADING-LADING, Indonesia — He was in the front row praying with his brother-in-law when the mosque began to shake. Narto Aryadi clutched his arms around a large column and held tight.

The column tipped over but protected him from the second floor of the Jabal Nur mosque, which landed like a pancake on top of it. Narto had just enough room to turn over and start digging his way to safety with a chunk of debris, dragging his injured brother-in-law along behind him.

The distance was less than 20 yards. But it took Narto more than 12 hours of digging to clear a passageway under heavy beams that had fallen across their path. He also kept reciting every passage of the Quran he could remember.

“When dawn came, I thanked God and I realized I will be alive,” he said in an interview on Tuesday, a day after the ordeal. His brother-in-law was hospitalized.

Narto, 43, is one of only a handful of survivors pulled from the rubble on the Indonesian resort island of Lombok after a magnitude 7.0 earthquake struck Sunday evening off the north coast.

Only on Tuesday did Narto’s family tell him that his house, and every other house in his village, had been destroyed.

Officials say at least 105 people were killed in the quake and more than 20,000 people lost their homes.

The search for the missing continues, but the chances of finding more survivors shrink with each passing day.

The damage was worst in the villages and towns of North Lombok, a poor farming region and the area closest to the quake’s epicenter. About three-quarters of the fatalities occurred there.

Lombok’s north shore was littered on Tuesday with miles and miles of wrecked houses, shops and mosques. In some cases, entire villages lay in ruins.

Some buildings were jolted off their foundations. Others collapsed. Mostly, homes and shops were reduced to a jumble of bricks, timber, chunks of concrete and sheets of corrugated metal roofing.

Search and rescue efforts have been slow, in part because Lombok lacks the heavy equipment for such operations.

Most beach resorts in the popular Senggigi area farther south closed after the quake and sent their guests home or to lodging elsewhere.

Thousands of tourists who were visiting Lombok and the neighboring Gili Islands were being evacuated from Lombok by boat and airplane, officials said.

Initially, a shortage of vessels and aircraft left many tourists stranded and uncertain about how they would leave even as frequent aftershocks rocked the island.

No foreigners were believed to have died in the quake. At the Jabal Nur mosque in Lading-Lading, a crowd gathered to watch as rescuers used a hydraulic jackhammer to break up the concrete in the search for survivors and bodies.

Among those watching the operation was Suharto, 44, who also had been in the front row praying on Sunday evening when the earthquake struck.

While he scrambled to safety, his uncle, one of the mosque’s imams, could not.

Suharto, who like many Indonesians uses only one name, said more than 100 people had been in the mosque and that 10 or more might have been trapped inside.

“When I look at the building, I don’t think anyone could have survived,” he said.

As if to underscore his point, searchers laid out a large white tarp and placed one black body bag in a far corner, leaving room for many more.

Also watching the search operation on Tuesday was Muhammad Ma’ruf, 51. He too was in the mosque when the quake struck and, like Narto, hugged a column as the mosque collapsed.

He was certain he would die and asked God for forgiveness, he said.

But in his case, he and several others ended up in an open space below where the mosque dome had been. After a few minutes, they were able to climb out.

Narto, with his seemingly miraculous escape, has become something of a local celebrity.

A day after his ordeal, he was in remarkably good condition.

A serious-minded Muslim cleric, he is the head of his hamlet, Orong Nagasari. With every building there destroyed, he and his neighbors have moved to an open area nearby, where they are camping under plastic tarpaulins and sleeping on woven mats.

More than 30 friends and relatives gathered around him in the shade of a large tree as he recounted his experience to a New York Times reporter. Three aftershocks jolted the group during the hourlong interview.

Narto said that as he lay on the floor of the mosque, he could feel a slight breeze. Knowing that meant there was an opening, he devised a plan to dig toward it.

But five beams that had held up the second floor now blocked his path.

He knew that beneath the mosque’s ceramic floor tiles there was a thin layer of cement, and below that, sand.

He took a chunk of debris and painstakingly broke the tiles and cement at each beam, then dug out the sand underneath to create a passageway.

Dawn was breaking when he finally reached the last beam.

He could hear the voices of family members who were searching for him and soldiers who had come to find survivors.

Narto called out for help. But the soldiers were worried that if they tried to dig him out they would destabilize the pile of mosque debris.

He asked for a hammer so he could break through the floor more easily. The soldiers tied one to a pole and lowered it to him.

“I saved myself,” he said. His brother-in-law, Kartodi, was taken from the mosque to a hospital. His condition remained unclear on Tuesday and family members declined to discuss it.

Narto said he thought there could be more than 10 others still buried in the rubble but he doubted that any were alive.

“I didn’t hear any other voice in there,” he said. “The only voice I heard was my own and my brother-in-law’s.”

While digging, he recited every Quranic verse and prayer he knew.

“Anything I could remember I kept repeating so that God would save me,” he said.

Narto said he was not familiar with scientific explanations for earthquakes.

“This is done by God,” he said. “He can do anything. The earth and the sky belongs to him.”