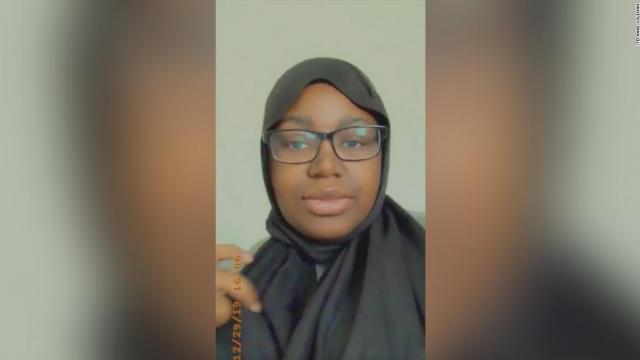 An employee of a Chicken Express restaurant in Texas says she faced religious discrimination when a manager sent her home for refusing to take off her hijab, a headscarf worn by many Muslim women.

Stefanae Coleman, 22, arrived at work on Monday wearing a hijab for the first time. As a recent convert to Islam, she said she was excited to don the religious covering and hopeful that her coworkers would be supportive.

But the single mom was left feeling "disrespected, baffled and highly upset" when her manager, citing dress code requirements, told her she could not wear the hijab at work.

"Once I clocked in, the manager said 'Take off anything that doesn't involve Chicken Express,' which I knew he was talking about my hijab," Coleman told CNN.

"So I didn't react, I just went to the back and took off my jacket and my purse. Five minutes later, he called me into the office telling me that I have to take it off because it's not a part of the work uniform," she said.

Coleman has worked at the fast food chain in Saginaw, a suburb of Fort Worth, for three months. She captured the exchange with the manager in two videos, which she posted on Twitter.

"Your job is your job. Your job has nothing to do with religion," the manager says on one of the videos.

"The job requires a specific uniform. [The hijab] is not a part of the uniform; you as a paid employee cannot wear it," he is heard saying in another video, citing the Chicken Express employee handbook.

A copy of the handbook viewed by CNN does not reference the headscarf or any other religious clothing. It does state that "only the Chicken Express hats or visors may be worn."

Unlike a hat, which may be removed, most Muslim women who choose to wear the hijab consider it a religious obligation. They do not remove it around men who are not part of their immediate family.

In the videos, the manager says he will discuss the issue with two others, identified by Coleman as another manager and area coach, before making a decision on what to do. He ultimately sent Coleman home.

The manager declined to comment when contacted by CNN.

Rhett Warren, an attorney representing the Chicken Express franchisee that operates the location where Coleman is employed, told CNN that sending her home was a "mistake" and that she "is not facing discrimination for her decision to wear a headscarf or for being Muslim."

"The manager's decision to send Ms. Coleman home for wearing the headscarf was due to a lack of training," Warren said. "The manager was using a strict interpretation of the company policy that does not allow derivations from the standard employee uniform, and he unfortunately did not take religious liberty into consideration."

Coleman was paid for the hours she would have worked on Monday had she not been sent home, Warren said.

The store also plans to rewrite its dress code and enhance training so that other employees who choose to wear religious clothing are free to do so, Warren added.

Coleman returned to work on Tuesday, after the store owner called to apologize for the manager's behavior. However, she said she was still harassed by coworkers who did not support her decision to wear a hijab.

"Stefanae agreed to come to work but due to the overall negative hostile atmosphere at work she couldn't stay and decided to leave," said Faizan Syed, executive director of the Council on American-Islamic Relations (CAIR) in Texas. The civil rights group is representing Coleman in the matter.

The experience has left Coleman "uncomfortable" and reconsidering her employment with Chicken Express, Coleman said.

There are "so many Chicken Expresses in Texas and they all allow people to wear hijabs with no problem," she said. "It was racism and discrimination... They're just trying to sweep it under the rug."

"I just would have never thought that this would ever happen to me," Coleman added. "I see it all the time on the news, but never once did I even think that I would get sent home because of it."