An Argument for Ruining Your Horrible Life 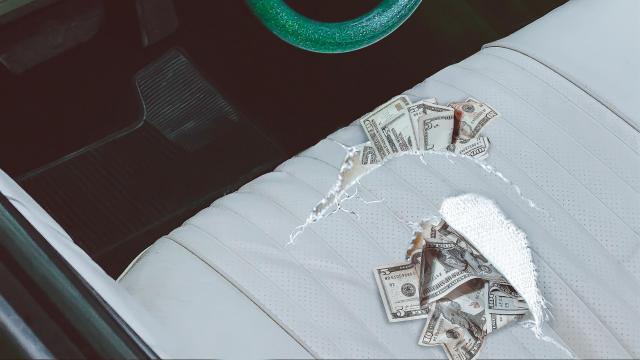 — The Shallow End of the Car Pool

Q: I’ve been a part of a car pool for several years. Recently I asked the main organizer (one of two drivers) for a breakdown of the charges he levies on each member. I was stunned to find out that he was effectively doubling the cost of each trip by charging for every conceivable cost of maintaining his car — including depreciation, tires, routine maintenance — and soon, the cost of a new car. It’s his car; he would be driving to work each day regardless of whether there were other passengers or not. I feel that charging anything above gas and a driver charge is unfair.

A: From my studies of heterosexual culture, isn’t the idea of a “car pool” that turns are taken, and cost is therefore assumed equally by means of the turn in which one is the provider of the “car” to the “pool”? Is it not something like a key party, but the keys are for the starting of cars? Like gender-reveal parties and premade pie crusts in grocery stores, this is totally baffling to me. Run, quit, emigrate, anything, just get away!

Q: I cannot stand my colleagues. For two years, one has asked me uncomfortable, emotionally manipulative questions that I know purposefully push my boundaries: personal financial questions, extremely personal relationship questions about my boyfriend, asking repeatedly exactly where I live and the route I take to get home. Once, he said he “needed help watering his plant,” and then came up behind me and pushed me into his desk, which I certainly consider sexual harassment. I would report this, but I know it would destroy my small team and not end well — not to mention that my other colleagues have made their views on #MeToo clear.

I feel stuck. I know only very bad bad uncomfortable things would come of reporting the guy, because the rest of the team would not support me, and it could jeopardize my ability to get a reference from my boss in the future. But I hate working with this guy, and I believe that women should report this stuff. I am planning to move cities in the next year and I don’t want to find another job to fill only a short gap. I am going crazy over here from anger and loneliness.

A: Because this has been going on for a while, you have played an endless tape in your head of what would happen if you spoke up. A wind blows in a dark clearing, a half-moon of men all turn white faces to you in unison, revealing ... gleaming vampire fangs? “Very bad bad uncomfortable things” is an incredible phrase. But these very bad bad things are, for now, a fantasy.

For asking that your workplace be not foul, you could be the one to suffer financially or personally. It really could be worse than what you’re experiencing now. The real world is shabby and the right thing doesn’t always happen.

But these Chads and Ricks are just dudes. They’re not supernatural.

And what you’re going through now is awful. This is a stupid example but: One day at my desk while enjoying a nice deli BLT, a wisdom tooth started making shooting pains. The tooth did not magically improve. But to me, nothing was scarier than the idea of confronting the situation. For many years I let this tooth slowly, agonizingly disintegrate in my mouth. I’d be snacking on a muffin and then suddenly I’d be crunching down on a sliver of tooth. I felt more comfortable with the agony I knew and didn’t want to risk something worse. What I’m saying is: I’m the dumbest person alive and also a coward. Fortunately, I don’t think you’re like me.

I’m not suggesting you do something because it’s the right thing to do, or because it’ll be easier than what you’re going through, or because you’ll feel better. I think you should do something because you’re not living by your own ideals. I think you’re disappointed in yourself. You don’t want to make a mess. You don’t want to “destroy” your small team (which should clearly be destroyed). You’re hiding, because you’re afraid. Well, you should be! I think you wrote in for courage, though. The least you can do for yourself is get unstuck. Grab the wheel with both hands and feel alive again.

— LLC for You and Me

Q: I jumped into a partnership without any thought. I went into business with friends.

Worse, they came from the most toxic workplace on earth. They swore the toxic workplace was behind them and that, together, we would create a new work environment filled with friendship and sisterhood and respecting of boundaries. And then they turned out to not be my friends at all and to, in fact, still be carrying toxicity, pulsing through their veins and gushing in and out of their wizened aortas. I thought I was being gaslighted, but that seemed too dramatic. (And could women even do that to each other, or was it strictly a male-on-female crime?) Then I looked it up, and I was being gaslighted, and then some.

I came close to a nervous breakdown, and hid out for long enough that their baby company began to crumble without me. Then I ran for the hills. My question is: Are all partnerships impossible?

A: I spent, all told, about 15 years as a business partner in startups, though probably never a particularly good one. They say the secret is communication. But communication is the worst! Communication usually involves feelings and telephones, two of the most gross things. The best I could ever do in a business marriage is how I try to do regular love-marriage. If you can truly explain and manage the most important values to your partner that are also alien to you — whether they’re about privacy, or dignity, or fairness, or money — then you’re doing the best job possible, even if you’re doing a shabby job otherwise. Partners have to stand together in the face of adversity. If you can’t explain what your partner cares about and why, it’s time to get divorced in the great state of Delaware. In time you will learn to love LLC-style again.