Amy McGrath Is Avoiding Attack Ads. Can a Congressional Candidate Win Without Them? 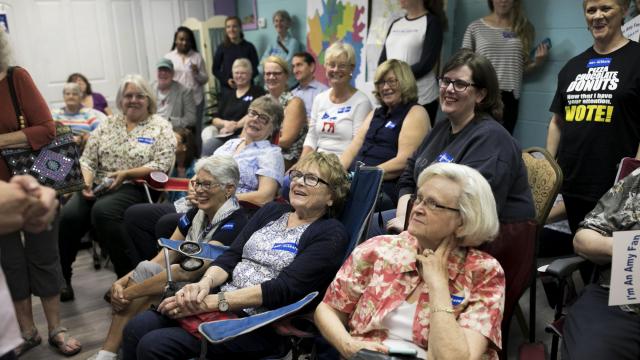 LEXINGTON, Ky. — Helen Trump is certain of one thing about the midterm election: She cannot wait until it is over. She will no longer have to hear the negative campaign ads that have become the inescapable white noise in her life.

The race for Kentucky’s 6th Congressional District between the Republican incumbent, Andy Barr, and his Democratic challenger, Amy McGrath, has featured one of the highest concentration of political ads in the country — almost 7,000 airings — in one of the most fiercely fought races.

But there is a twist. The contest also has one of the most lopsided ratios of negative-to-positive ads, with Barr and aligned Republican groups spending more than $3 million in the relatively inexpensive Lexington media market in the past six weeks, overwhelmingly on spots attacking McGrath.

McGrath, so far, has not run attack ads against Barr, an approach that makes this contest a laboratory to test the long-held proposition that while voters find negative ads distasteful, candidates use them because they work.

“Voters universally decry negative ads,” said Erika Franklin Fowler, the director of the Wesleyan Media Project, which analyzes political advertising. “But we are biologically attuned to pay more attention to negative information. It is the same reason that loud sounds or other things will draw our attention. We remember negativity more.”

In the case of Helen Trump, McGrath’s approach may be challenging that wisdom. “My husband and I are both Republicans, but socially liberal and fiscally conservative,” said Trump, who voted for Barr in 2016. “Andy Barr’s just trying to do what everyone else is doing. Dirty and old. Sound bites, half sound bites, not really true. Her side is telling you about her.”

“I don’t know Andy Barr’s stance on anything,” added Trump, who owns three sports bars in the Lexington area. “All I know is he hates her.”

Barr’s campaign is not so sure his opponent has been all positive. In her latest ad, for instance, McGrath, who played college soccer at the Naval Academy, bats away shots on goal as she tries to rebut Barr’s attacks. But she also lodges a late shot of her own: “You’re the one who’s doubling the national debt.”

“While the ads themselves are not negative in tone, in overall direction they could certainly be perceived as negative because they are misleading on his record,” said Tres Watson, the communications director for the Kentucky Republican Party. He defended the Barr campaign ads: “It’s not like they are making things up. They are using her own words.”

Barr declined to discuss his ads. This week, he released another ad accusing McGrath of favoring abortion rights “until the very moment of birth,” an assertion McGrath heatedly denied. “I am Catholic and have three small kids, and am certainly not OK with abortion ‘on demand in the ninth month,’ which by the way is a ridiculous and offensive scenario,” she said.

McGrath’s strategy puts her in the decided minority this election cycle, which that has featured record spending on negative ads by outside groups in both parties, along with the candidates’ own attacks.

Hundreds of millions of dollars are flowing into the midterm campaigns, with Republicans relying heavily on huge donors like Sheldon Adelson writing checks worth tens of millions to super PACs, while Democrats are flooded with small donations. Rep. Ben Ray Luján of New Mexico, the chairman of the Democratic Congressional Campaign Committee, told reporters last week that more than 82 Democratic House candidates had raised over $500,000 in the third quarter — and 60 of those had raised over $1 million, 30 had raised over $2 million and eight had raised over $3 million.

Among those leading the pack: McGrath’s $3.65 million, a stunning sum for a first-time candidate running in a relatively small state. With that money, she has focused her ads on her biography as a retired Marine combat aviator, with others that respond to Barr directly.

Late last week, she put up a 25-foot billboard in rural Mount Sterling that said, “Remember when you swore you’d stop supporting candidates who only run negative campaigns?” She hopes to drive that home on Friday when former Vice President Joe Biden campaigns with her in nearby Owingsville just a day before President Donald Trump holds a rally to support Barr.

“Believe me, there are some days I just want to bash him,” McGrath said in an interview, shaking her fist.

But, she said, “I would like to win this thing the right way.”

McGrath’s strategy carries risk because negative ads have been known to do substantial damage, especially to first-time candidates. And some voters like Helen Trump are not moved by her ads either. “We cracked up the other night,” she said. “There’s an ad now where she is playing soccer. What the hell does that have to do with anything?”

While some in her party balked at McGrath’s decision to stay positive, she said she “would like to make a statement” by not resorting to pure attacks.

Barr has also been aided by the Congressional Leadership Fund, the super PAC aligned with Speaker Paul D. Ryan, which has spent more than $2 million in roughly the last six weeks on ads that attack McGrath. Barr has run a couple of positive spots, but has also spent close to $1 million on negative ads. Across the country, nearly 230,000 ads aired in House races this year, more than twice the number in 2014, according to an analysis by the Wesleyan Media Project. In Senate races, more than half of the ads in September were purely negative. Overall, the analysis shows that Democrats have been much less negative than Republicans.

In few cases is the distinction between the parties as stark as in Kentucky’s 6th District. Positive ads made up 89.9 percent of Democratic ads, while Republicans aired 31.5 percent positive ads, the Wesleyan analysis showed.

Fowler said that overall this cycle was not more negative than previous ones, but it might well seem that way because the volume of ads had increased substantially.

Typically, Fowler said, challengers need to use negative ads “to provide voters with a reason to vote for them instead of the incumbent.”

In the Barr-McGrath race, it is the incumbent, Barr, who is trying to paint McGrath as “too liberal” for her district.

With some voters, particularly women, the ads do not appear to be working.

“Barr attacked her and used Pelosi’s name trying to make her out to be this women’s lib persona,” said Delenna Farmer, a retired teacher. “He’s trying to make it a national issue instead of local to keep attention off his tenure in office, which is voting with the good old boys. Women are tired of it.”

Another retired teacher, Beth Drake, said: “I’m just not a fan of his ads. It’s like he’s never really had a positive ad. Every one of them has had a negative tone to it, and that just makes my resolve even stronger.”

Others who analyze political advertising said some Democrats might be making a strategic calculation as much as a moral one by staying positive. “This election is not about those Democrats,” said Kenneth Goldstein, a professor of political science at the University of San Francisco. “This election is about President Trump. All Democrats have to do is say: ‘I am OK. I am a good alternative.’ In essence, that is what Amy McGrath is trying to do.”