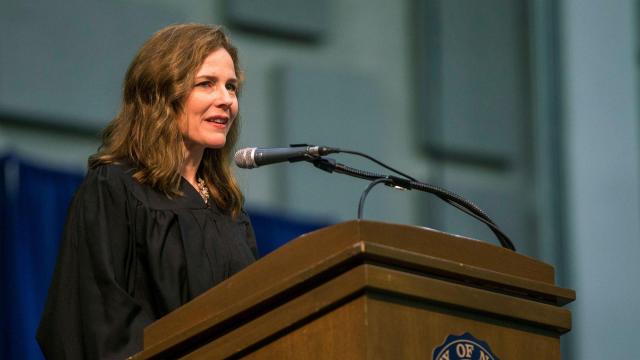 CNN — President Donald Trump said Tuesday he plans to announce his new Supreme Court nominee at 5 p.m. on Saturday, claiming that the country will need all nine justices in order to decide on the legality of mail-in ballots following the November elections.

Barrett was back at the White House Tuesday for a second day in a row, according to two sources familiar. The sources said she impressed Trump and others during initial White House meetings on Monday.

Trump has not finalized his decision, and with days to go until he announces his pick on Saturday, his thinking could change.

The White House is currently working to schedule a meeting between Trump and Judge Barbara Lagoa while he's in the Miami area Friday, two sources tell CNN.

Lagoa is one of five female candidates the President is considering as a replacement, but two sources said her chances have dimmed significantly since the weekend.

But for now, Barrett -- currently sitting on the United States Court of Appeals for the Seventh Circuit in Chicago -- is his clear front-runner and is viewed inside the White House as the likely nominee.

The President announced Tuesday morning that he will announce the pick Saturday at the White House.

Officials said Trump seemed very enthusiastic about Barrett after their meeting, which lasted for several hours. He told people afterward he believes Barrett will be very well received by "his people," one official said. While no one close to the process would go so far as to say Barrett is the pick, Trump is giving people the impression he is completely sold on her.

A source familiar with Trump's private conversations told CNN that one of his confidants on this issue told him that this pick is so important to not only his legacy but his re-election bid that she will effectively "be your new running mate."

Lagoa remains on the list but multiple people familiar with the matter told CNN that Trump is fading on the idea of picking her. While Trump was initially enthused at the prospect of nominating a Cuban-American from Florida, a critical electoral battleground, Lagoa hasn't been previously vetted for the Supreme Court and some advisers suggested it would be a heavy lift to clear a new name quickly.

The White House may still schedule a meeting with Lagoa, but two sources said her chances have dimmed significantly since the weekend.

On Monday, Trump initially said he was considering five names for the high court vacancy before adding he was really focused only on "one or two" names.

Others on the list -- including federal appeals court judges Joan Larsen and Allison Jones Rushing, and deputy White House counsel Kate Todd -- are not considered serious contenders, particularly after it was learned inside the White House that Larsen volunteered for Joe Biden's 1987 presidential campaign.

Trump has said the end-of-week timing for the pick was meant to show respect for Ginsburg, who will lie in repose at the Supreme Court on Wednesday and Thursday before a private interment at Arlington National Cemetery next week.

But the President is also keen on extending the dramatics of his selection, likening it to his version of a running mate selection during an election year, according to one adviser.

Trump plans to make his announcement during a prominent prime time address, as he did for Neil Gorsuch and Brett Kavanaugh earlier in his term, according to the adviser.

In the past, the President has reveled in the drama of the moment -- including orchestrating an attempt to convince the media he had selected Thomas Hardiman instead of Gorsuch in 2018 by having Hardiman leave his house and drive toward Washington.

This time, Trump has been clearer about who is on his list and how many names he is taking seriously.

He praised Lagoa during an interview on Fox News, but even some of her supporters -- of which there are many, including in Florida Republican circles and among Trump's political advisers -- acknowledge that Barrett is now the leading contender.

And while Cuban-Americans are an important part of Trump's re-election coalition, Lagoa presents a problem for some conservatives focused on the courts: her ties to the Bush family, which one source said is viewed skeptically by some court-focused Republicans because of President George H.W. Bush's appointment of Supreme Court Justice David Souter, who was expected to be a conservative but came to vote with the liberal wing.

Another factor weighing on Trump's decision, at least in some capacity, is Republican Sen. Josh Hawley, who has said his support for a Supreme Court justice is contingent on whether the nominee believes Roe v Wade is "wrongly decided."

Hawley said on Monday that Barrett "meets that standard." But he said he is less certain with the abortion views espoused by Lagoa and it's something he is still reviewing.

"I don't know the answer to that," Hawley said.

Hawley said he spoke with the White House about his views over the weekend.

Now that GOP Sen. Mitt Romney of Utah has signaled that he is on board with moving ahead with a vote ahead of the election it all but ensures any nominee put forward will be confirmed barring any potential missteps by the nominee during the confirmation process.