Raleigh, N.C. — Most people take their ability to be physically active for granted. Many even choose not to exercise.

Jacky Broersma, 43, cannot imagine a sedentary lifestyle. She loves sports and competition so much that she didn't let amputation hold her back.

The native South African, who now lives in the Triangle with her husband and two children, overcame many obstacles to remain active. 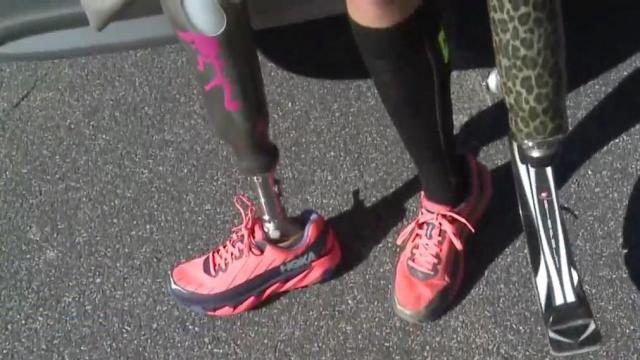 If you encounter her at Umstead Park near Cary where she runs the trails, you're likely to see that she now has more than two legs.

"This is my leg that I use for walking, everyday walking," said Broersma, as she displayed different custom prosthetics. "I mean I've got a prosthetic for swimming...and I've got one that I just use for the gym."

Her favorite is her carbon fiber "running blade" prosthetic. It slides on top of a special sock on her below-the-knee stump.

Simple suction allows the prosthetic to remain snug, and a button on the prosthetic releases the air pressure which allows her to remove it. The prosthetic blade with a shoe-like tread is specially measured to match the length of her right leg. She says the flexible blade does not give her any advantage over other runners. It is designed to match the same springing response as a normal foot and ankle. 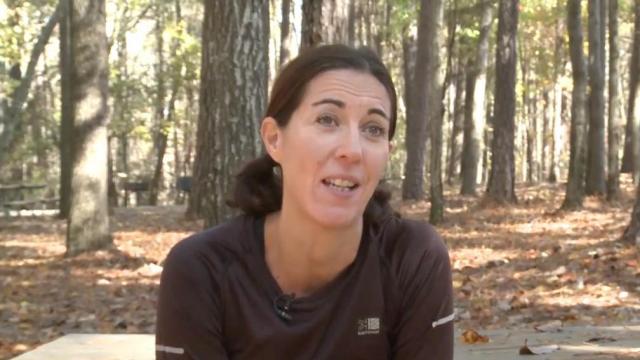 Broersma remembers the cancer diagnosis in 2001. "They found a lump in my leg which turned out to be cancer, and the only option was to amputate," said Broersma. The cancer had not spread, so she did not require radiation or chemotherapy. After five years, doctors gave her the "all clear," meaning she was cancer-free.

Seventeen years ago, prosthetic technology was not as far advanced. "The first one I had was really heavy. I'd get blisters all the time," she said.

Still, she managed to play squash and other sports that didn't require too much foot action. Then she learned about carbon fiber running blade prosthetics, which allowed her to do more than just walk. Her husband and two children began following her to 5K running competitions and, later, to marathons. She was determined to run past perceived limitations.

Running with special prosthetics is not an inexpensive pursuit. Below-the-knee running prosthetics like hers can cost $15,000 or more.

Above-the-knee models can run into the tens of thousands. She discovered this was a line that her health insurer would not cross. "Insurance sees it as a luxury. They see running as an amputee as a luxury, so they won't cover it."

The insurer's stance left her puzzled and a bit offended.

"Just because you're an amputee, are you expected just to sit and do nothing? Is that it? Is that the end of your life? Do you have to get depressed and just not achieve?"

With frequent participation in endurance running events, Broersma's answer to that question is an emphatic no. She is thrilled that some other amputees who have followed her on social media have been inspired to follow in her "blade" steps.