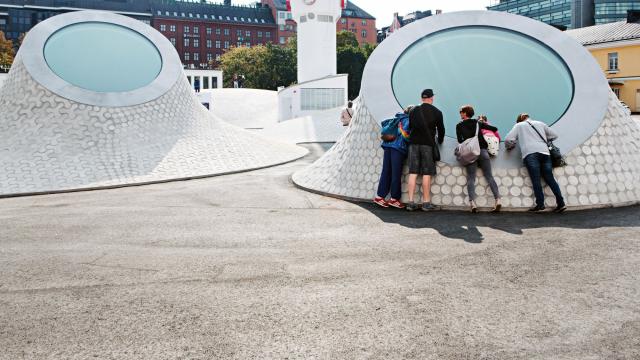 HELSINKI, Finland — Novelist Meg Wolitzer once wrote that Helsinki is “a place no one ever thinks about unless they’re listening to Sibelius, or lying on the hot, wet slats of a sauna, or eating a bowl of reindeer.” The city leadership here is keen to add something new to that list: fine art.

Amos Rex, a new contemporary art museum, goes a long way toward achieving that goal. A museum that appears to physically resist its placement in a vast underground space, it is topped by five conical domes that bubble up from the surface of the Lasipalatsi Square in downtown Helsinki like inverted craters of an alien moonscape. Children clamber up the mounds, teenagers skateboard down its slopes, and passers-by snap selfies.

“That was one of the intentions, to make it like a playground, and also to make a kind of new city space and city culture,” said Asmo Jaaski, lead architect of JKMM, the museum’s designer.

The weeklong series of parties and special events around the official Aug. 30 opening drew some 10,000 visitors, including the national art cognoscenti and scores of international journalists, making it one of the most eventful cultural happenings in the Finnish capital in years. “It’s what we hoped for but it’s more than we dared to expect,” said the museum’s director, Kai Kartio. “Since the opening, we’ve had endless lines.”

The $58 million privately funded museum arrives less than two years after Helsinki’s City Council rejected a plan to build a $138 million Guggenheim museum along the city’s harbor. City officials as well as residents were deeply, often rancorously, divided about the proposal, with supporters asserting that the Guggenheim would raise the city’s international profile and serve as an economic game-changer, while opponents said local resources were better spent on cultural institutions that showcased Finnish talent. Finland, after all, has a proud tradition of design exemplified by the architect Alvar Aalto, the designers Timo Sarpaneva and Tapio Wirkkala and, yes, Marimekko.

After the five-year controversy dissipated, Mayor Jan Vapaavuori of Helsinki said, everyone took a step back to reconsider the city’s cultural priorities.

“What the Guggenheim process led to was a quite serious reflection among all important art players in the city, where they were forced to assess their own place and role in today’s world,” Vapaavuori said in an interview. “The positive side of the discussion is that we have a more comprehensive understanding of what culture and art does for the city. It could be that without the Guggenheim discussion we would not be that far along.”

In many ways, Amos Rex vindicates the city’s decision to turn down the Guggenheim project, and instead champion a homegrown Finnish institution. The new contemporary art museum is funded by private money, whereas the Guggenheim was designed as a public-private partnership, which some artists feared would sap funding for local arts initiatives.

Kartio, who said he would have welcomed the Guggenheim, notes that planning for Amos Rex was already underway when the Guggenheim project fell apart. However, he added, “The timing was fortunate for us because of course politically, internally in Finland, we were compared to Guggenheim all the time. Since this was completely privately financed and homegrown, people were very fond of us, especially the people who weren’t in favor of the Guggenheim.”

The money to build the new museum came from a foundation established by the museum’s Finnish founder, Amos Anderson, a newspaper publisher and a patron of the arts, who died in 1961 and earmarked his fortune for the building of the Amos Anderson Art Museum. Four years after he died, the museum opened in his own home in Helsinki with a collection of mostly Finnish and other European art.

Seeking to build a new larger home, Amos Anderson museum and its officials chose the Lasipalatsi, or glass palace, a landmark of Finnish functionalist architecture that houses an entertainment and shopping center with an art deco cinema called Bio Rex.

Designed by architecture students in 1936 as a temporary site for the Olympics (scheduled to take place in Helsinki in 1940 but postponed until 1952 because of World War II), the Lasipalatsi was supposed to be torn down afterward, but remained, and became a cherished national landmark.

The private Amos Rex Foundation formed a real estate company with the city of Helsinki to jointly own the old entertainment complex, and to build a new museum, which it owns independently. The foundation leases the land on which both buildings sit from the city.

To build the museum while preserving the existing building, the architects came up with an ingenious idea to excavate the central plaza and create 24,000 square feet of exhibition space. Below the exhibition halls, two stories down, are archive and storage rooms.

Amos Rex, which derives its name from the museum’s founder and the cinema, has helped create a kind of “museum mile” that joins up with the three of the city’s nearby art institutions — Kiasma Contemporary Art Museum, the Helsinki Art Museum and Kunsthalle Helsinki. “It’s one big cluster, and we bind it together in a way, and we all support each other,” Kartio said.

For its first exhibition, Kartio highlighted the international curatorial ambitions of the museum by choosing the Japan-based art collective teamLab. For “Massless,” its digitally based exhibition, teamLab has blacked out the walls of four gallery spaces in the subterranean museum, using immersive and interactive installations. (The show runs until Jan. 6.) One piece, “Graffiti Nature,” features flowers, butterflies, frogs and whales that glide across the floors and walls, inviting visitors to rub their hands across the walls to generate digital flowers, or jump on the floors to squash the frogs that burst into colorful splatters. With “Vortex of Light Particles,” the museum’s main hall has been converted into a swirling stream of white and blue light siphoned upward into one of the building’s light portals, as if it were a giant black hole.

The results of Helsinki’s post-Guggenheim rethink are manifest throughout the city: A few blocks away from the new museum, the Helsinki Central Library Oodi is under construction and expected to open in December. The Helsinki Art Museum is organizing an International Helsinki Art Biennial to open in 2020, and two weeks ago, the city announced its intention to build a world-class architecture and design museum in the harborside space that the Guggenheim might have occupied.

“A lot of exciting things are happening right now in Helsinki,” said Raija Koli, director of Frame Contemporary Art of Finland, which provides grants to Finnish artists and coordinates Finland’s participation in the Venice Biennale. “We’re regrouping and I think in a good way. There’s a lot of good will from everyone to kind of bring their resources together, and that’s why it’s such a great time to be working with art and culture here right now.”