Among Israel’s Ultra-Orthodox, It’s (Sort of) the Year of the Woman 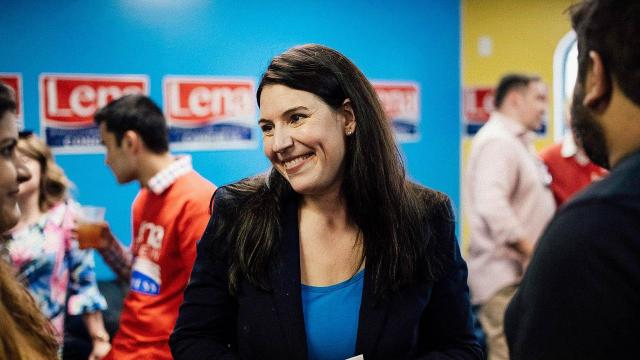 BEIT SHEMESH, Israel — Orthodox and less-religious Jewish women in Beit Shemesh, a fast-growing, ultra-Orthodox stronghold, have been stoned, pepper-sprayed, spat on or called “whore” by puritanical Jews who take their beliefs about modesty to violent extremes. So the election this week of a woman as mayor — with the support of thousands of ultra-Orthodox voters who defied their rabbis to support her — was felt across this hilly city like nothing less than an earthquake.

Aliza Bloch, a 51-year-old former high school principal, didn’t just defeat the two-term incumbent, an ultra-Orthodox man who enjoyed the backing of rabbis from the dominant sects. She did it by uniting nonreligious longtime residents angry about being turned into minorities in their own city, English-speaking Orthodox immigrants impatient with inadequate government services, and forward-thinking ultra-Orthodox who were both sick of being denigrated as not religious enough and embarrassed by the bad press that Beit Shemesh has earned as a hotbed of religious fanaticism.

“Until now, radicals controlled the discourse,” Bloch told a cheering crowd of supporters who had waited around till after 3 a.m. Thursday for her razor’s-edge victory to be clinched with the counting of absentee ballots. “They prevented us from seeing one another as human beings. Until today, they were the ones who set the tone.”

But no longer, she vowed: From now on, the city would become a model for all Israel. “We’ve realized that we share a common good that unites us,” Bloch said, adding: “No more ‘I take care of the people in my sector.’ We’re done with that sort of talk in Beit Shemesh.”

Tuesday’s mayoral and council elections, a once-every-five-years affair in Israel, were dotted with small-scale coups, comedowns and comebacks across the country. But it was the Haredi, or ultra-Orthodox, sector that showed the most intriguing new uses of its considerable political clout.

In Haifa, one of the leading Haredi parties, Degel HaTorah, or Flag of the Torah — representing the so-called Lithuanian wing of the non-Hasidic ultra-Orthodox — broke with the others and endorsed a nonreligious woman, Einat Kalisch Rotem, 48, who rolled to victory over a longtime incumbent to become the first woman elected as mayor of Israel’s third-largest city. (Jerusalem and Tel Aviv, the two largest, have elected only men to the top job.)

Gilad Malach, head of the ultra-Orthodox program at the Israel Democracy Institute, said the Haredi sects believe Jewish law dictates that only men should lead, and that women should avoid calling attention to themselves in the way that politics requires. “Their belief is a woman shouldn’t be a mayor, prime minister or even a member of the Knesset,” he said. “I don’t remember a time when they had a choice and they chose a woman.”

Even more groundbreaking, Degel HaTorah leaders celebrated and even bragged about Rotem’s victory in public. One of the party’s elected lawmakers, Moshe Gafni, placed a fawning congratulatory call to her — “Now you can do everything you think should be done,” he said. “We are with you” — and then posted a videotape of the call online. And when the new mayor-elect showed up at one of the sect’s synagogues late that night, hundreds of young yeshiva students sang and danced around her as if she were a renowned Torah scholar.

“They welcomed her as a rabbi — it was unbelievable,” Malach said.

Yet as big a step as this was, activist ultra-Orthodox women reacted bitterly to the celebrations and congratulations for Rotem, saying it showed how far they still had to go. “The Haredi establishment supports secular women becoming mayors, but what about Haredi women and their daughters? Let them stay at home and stick to their measly jobs,” Michal Chernovisky, a leader in an effort to help ultra-Orthodox women enter politics, wrote in Hebrew on Facebook. The ultra-Orthodox sects have typically wielded political power by voting as a bloc and by uniting across internal rifts — Hasidic and non-Hasidic, Ashkenazi and Sephardic — to deliver the biggest possible numbers for their candidates and their allies. But with the Haredi population already more than 1 million, or about 12 percent of the country, and still growing fast, the sects are starting to strike out on their own, Malach said.

In the Jerusalem mayor’s race this year, for example, Yossi Daitch, a Hasidic candidate, ran with the backing of the Hasidic party Agudat Yisrael, or Union of Israel. But the two other major ultra-Orthodox factions, Degel HaTorah and Shas, the Sephardic party, endorsed Moshe Leon, a non-Haredi businessman. Daitch stayed in the race even when it became clear he was unlikely to win — a sign of bad blood between the Haredi parties that, if unresolved, could mean trouble for Leon in his runoff with Ofer Berkovitch, a nonreligious deputy mayor.

But it was the mayoral upset in Beit Shemesh, in the Judean foothills west of Jerusalem, that had veteran political analysts reaching in vain for historical comparisons and calling it almost biblical.

If Bloch was facing a well-entrenched incumbent, in Moshe Abutbul, he was fortunately highly unpopular, seen as having neglected the needs of many of his constituents and done little more than watch as many of the non-Orthodox fled seeking a better quality of life elsewhere.

And ultra-Orthodox voters realized they were being ill-served, too, said Daniel Goldman, a supporter of Bloch’s and chairman of Gesher, a group that promotes coexistence among nonpracticing Jews, the ultra-Orthodox and everyone in between. “The new places in town are all Haredi, and the public infrastructure there is shocking,” he said, with school children studying in trailers, inadequate bus service, and too few ritual baths and synagogues.

Bloch, a mother of four, promised to bring fairness to the delivery of city services, reverse the exodus of young people, and attract new employers in technology and other desirable industries. Mindful that Beit Shemesh’s population growth has also included worldlier English-speaking ultra-Orthodox, she also promised to hire English speakers in the schools and city offices to make their adjustments easier to life in Israel.

But she also faced challenges unique to Israel’s ultra-Orthodox milieu. A religious woman herself, if not Haredi, Bloch demonstrated great deference to Haredi sensibilities in her campaign, by keeping her own face off nearly all her campaign posters. “I was really challenged in a male-dominated area,” Bloch said in a phone interview as the votes were being counted. “I’m a religious woman who made herself aware to others through very hard work — even harder because I did not post photos of myself in synagogues, or reading the Torah.” Tal Schneider, the political reporter for Globes, an Israeli business newspaper, said she was bowled over by Bloch’s restraint in her advertising. “Now she can change policy, but to get there she had to take out the most important component of democracy, which is the person,” Schneider said. “It’s mind-blowing.”

It also worked. Thousands of ultra-Orthodox voters — voting their own minds, rather than their rabbis’ dictates — split their tickets, voting for Bloch for mayor and for Haredi candidates for the City Council. Many more, unwilling to defy rabbinical authority outright, simply did not vote.

As the final votes were being tallied early Thursday, one more twist clinched the victory for Bloch.

The violence in Beit Shemesh had not just affected women and girls: Fanatical ultra-Orthodox Jews have even beaten up religious soldiers who dared to be seen around town in uniform. But it was the soldiers of Beit Shemesh who put Bloch over the top: After trailing by about 250 votes with all precincts reporting, she pulled ahead thanks to overwhelming support from army bases and others whose ballots were counted last.

“She did what I think most of us thought was impossible,” Goldman said of Gesher. “I’m eating my hat with mustard today, and it’s the best meal I’ve had all year.”