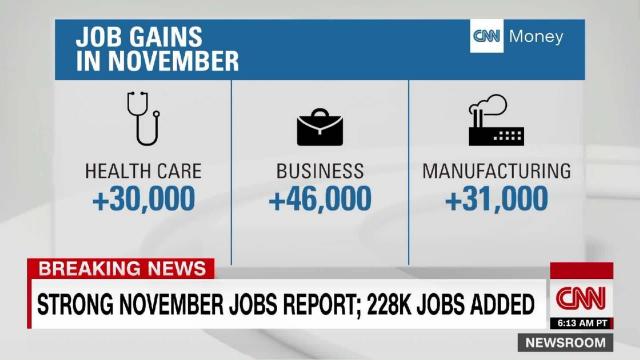 NEW YORK (CNNMoney) — Americans got a boost to their paychecks in November. But the increase in wages remains frustratingly low given the health of the overall job market.

Average hourly earnings rose 2.5% over the past 12 months. That's a slight improvement from the 2.4% increase the government reported for October. Still, it remains below the 3% increase that most economists (not to mention workers) would like to see.

People are finding jobs. That's not the problem. The economy added 228,000 jobs last month and the unemployment rate remained at 4.1% -- its lowest level since December 2000.

But for whatever reason, employers aren't showering workers with big pay raises.

Even President Trump's National Economic Council Director Gary Cohn seems puzzled by this trend. He noted in an interview with CNBC Friday morning that "we're still not growing wages in this country."

However, it seems that many Americans are still just happy to have a job and are not demanding bigger paychecks.

"Slow wage growth is the biggest conundrum here," said JJ Kinahan, chief market strategist with TD Ameritrade "Small wage increases are still able to attract talent. Most of us thought this would have changed by now."

Kinahan noted that one potential factor at play is that the jobs report does not take into account other perks that workers want, things like the ability to work from home more often, free meals at the office and better insurance options.

"People are increasingly looking for other benefits, and not just wage growth," Kinahan said.

Another reason why paychecks may not be growing? Inflation is still not much of a problem.

The government said in November that consumer prices rose just 2 percent over the past 12 months. So even a meager 2.5% pay raise is more than enough to offset the relatively small cost of living increases that many Americans have faced.

Still, Andrew Chamberlain, chief economist with job search site Glassdoor, wrote in a report Friday morning that based on inflation trends and productivity growth, wages should be rising between 3% and 4%.

There may be some hope on the horizon though.

Mark Hamrick, senior economic analyst at Bankrate.com, said that if employers keep adding jobs and the unemployment rate inches lower, companies will have no choice but to finally start paying more since workers will demand higher salaries.

Hamrick wrote in a report that wage increases "are likely headed closer to 3 percent in the coming year as long as the economy continues to expand and no dramatic black swans emerge."

There are hopes that tax reform might push companies to start paying workers more too.

But there's a debate as to whether big businesses will really start to give employees raises and hire more or just use any potential savings from a lower corporate tax rate to reward investors instead with dividend increases and more stock buybacks.

Nonetheless, there should come a point where employees will demand better pay and even feel comfortable enough to leave and find another place to work in order to get a salary boost instead of sticking at a low-paying, dead-end job.

Companies may have the bargaining edge now but it may not stay that way for much longer.

"It's not going to be an overnight change but there eventually will be pressure to increase wages," said Bodhi Ganguli, lead economist at Dun & Bradstreet. "You will have to offer people more money to fill jobs if the overall economy keeps improving."