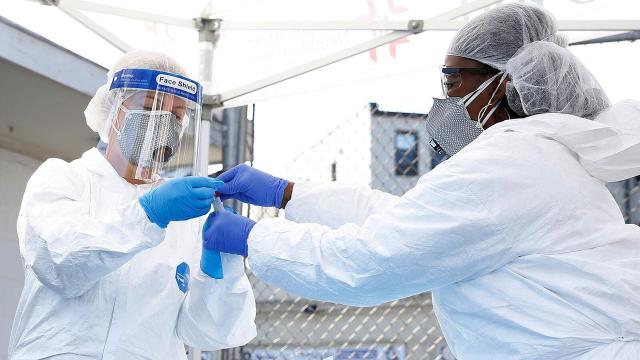 CNN — The United States reported the five highest days of Covid-19 cases right up to election, according to data from Johns Hopkins University.

The figures represent the highest number of reported cases since the pandemic began. Tuesday ranked fourth with about 85,200 reported cases, the data showed.

Last Friday, the US reported 99,321 new cases -- the highest single day number of infections recorded for any country. And at least 31 states set daily infection records in October.

Experts have warned this bout with the virus will be the worst one yet -- and alarming trends are already pointing in that direction. In just one month, the country's 7-day case average nearly doubled.

Hospitalizations are also surging, with the number of patients nationwide rising by more than 10,000 in just two weeks, according to data from the Covid Tracking Project. Hospitals in some parts of the country have hit their "breaking point," according to emergency medicine physician Dr. Leana Wen.

Hospital officials in El Paso, Texas, are now preparing to open the city's civic center as an overflow medical facility and add a fourth mobile morgue. In Arkansas, Bo Ryall, president and CEO of the Arkansas Hospital Association, said there is a shortage of health care workers caused by fatigue, competition from other states, increasing costs and community exposure.

And when hospitalizations climb, deaths are likely to follow, doctors have warned.

The virus' spread changed the way Americans cast their votes, as tens of millions of people voted early by mail or prior to Election Day. People recovering from Covid-19 or quarantining from being exposed to the virus were able vote, a spokesman for the US Centers for Disease Control and Prevention told CNN.

As of Tuesday afternoon, the US reported 9.3 million cases of the virus and more than 232,000 people have died, according to data from Johns Hopkins University.

Researchers from the University of Washington's Institute for Health Metrics and Evaluation project that 399,163 Americans could lose their lives to Covid-19 by February 1.

However, more than 130,000 lives could be saved by March if Americans wore masks, Dr. Francis Collins, director of the National Institutes of Health, wrote in a blog post on Tuesday.

"If more people make the decision to wear masks in public today, it could help to delay—or possibly even prevent—the need for future shutdowns," he wrote.

The numbers will likely get worse before they get better and officials worry the upcoming holidays -- and the gatherings that will come with them -- will further fuel an already rampant spread into the winter months.

But it doesn't have to be this way. Public health measures touted by experts for months -- including face masks, social distancing and regular hand washing -- can help hold the virus down.

At least 36 states are reporting more new cases than the previous week while only five -- Alabama, Hawaii, Louisiana, Oklahoma and Tennessee -- are reporting a decline, according to data from Johns Hopkins University.

Working to combat the pandemic's grip, some state leaders have pushed new measures in hopes of slowing the spread of the virus.

In Connecticut, Gov. Ned Lamont announced new guidelines including limiting restaurants to 50% capacity, with no more than eight people at a table and limiting indoor event spaces and theaters, among other restrictions. Lamont also recommended residents stay home between 10 p.m. and 5 a.m., a move he said would help limit socializing.

Massachusetts Gov. Charlie Baker on Monday announced a Stay-At-Home advisory, which will be in effect from 10 p.m. to 5 a.m. All gatherings -- limited to 10 people in homes indoors and 25 people outside -- need to end by 9:30 p.m., he said. Everyone over the age of 5 will also be required to wear a face covering in public.

Meanwhile in West Virginia, the governor sounded the alarm on the state's infection rate and the resources stretched thin.

"When it boils right down to it, what I have done now I've taken an even more drastic step in trying to provide testing and our National Guard, local health departments are now being tested beyond belief and being stretched beyond belief," Gov. Jim Justice said.

In Nebraska, a recent surge of coronavirus cases resulted in a 91% increase of hospitalizations in the Omaha metro area from October 17 to 31, according to the chief medical officers of three major hospital systems. Hospital capacity and staff are approaching their limits.

"No doubt if this trend continues, not just our hospitals, but every hospital in the state could be at capacity," said Dr. Carey Ward, chief medical officer of CHI Health.

The city of El Paso, Texas, set another record on number of hospitalizations Tuesday as the city's Covid-19 dashboard reported there are 998 people in the hospital. The city reported 1,085 new Covid-19 cases on Tuesday, bringing the total number of cases to 52,817, according to the dashboard.

A full 92% of positive cases are among the Hispanic population. Broadly, health experts have said Hispanic people are disproportionately hurt by coronavirus due to their work as essential workers and multigenerational living conditions.

Samaniego ordered a shutdown Thursday of all nonessential services for a two-week period.

"Judge Samaniego has no authority to flout Gov. Abbott's executive orders by shutting down businesses in El Paso County," said Paxton in the release.

A hearing on the motion is scheduled for Wednesday.

CDC: People with Covid-19 or those exposed cleared to vote

People recovering from Covid-19 or quarantining from being exposed to the virus were still able to vote safely Tuesday, the CDC told CNN.

"In-person voting can be carried out safely following CDC's recommendations for polling location and voters," a CDC spokesperson wrote in a Monday email.

Voters who are sick or in quarantine were told to let poll workers know when arriving at the polling location and were told to wear a mask, stay at least 6 feet from others and wash their hands or use hand sanitizer before and after voting.

Poll workers who are assisting voters with symptoms should be provided with personal protective equipment and trained on how to use it properly.

"When possible, alternative voting options -- which minimize contact between voters and poll workers -- should be made available for people with Covid-19, those who have symptoms of Covid-19, and those who have been exposed," the CDC spokesperson said.

The way Americans follow the results will also be starkly different given that health experts recommended against large gatherings. Massive election parties have largely been canceled as the CDC has said large in-person gatherings are of the highest risk.

Read more on how to vote safely

Covid-19 case counts across the US are impacting children at "unprecedented levels," according to numbers released Monday by the American Academy of Pediatrics and the Children's Hospital Association, which track data reported by state health departments.

There were 61,000 new cases in children during the last week of October, "which is larger than any previous week in the pandemic," the AAP said in a statement.

And since the start of the pandemic through October 29, more than 853,000 children have tested positive for the virus, the AAP said. Nearly 200,000 of those cases were during the month of October.

That number is likely an undercount as symptoms in children can often be mild and look like common colds or viruses and many children go untested.