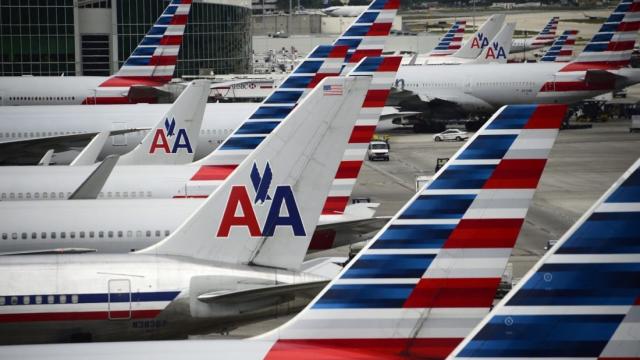 The airline revised its guidelines on Monday for comfort animals on flights.

Those who want to bring such an animal on board now have to file paperwork 48 hours before a flight, and there are new restrictions on which types of animals are permitted.

"We support the rights of customers, from veterans to people with disabilities, with legitimate needs for a trained service or support animal," American Airlines said in a press release. "Unfortunately, untrained animals can lead to safety issues for our team, our customers and working dogs onboard our aircraft."

Emotional support animals provide comfort to those suffering from emotional or psychological conditions such as anxiety, depression and panic attacks. They're typically allowed to fly on planes for free if they meet certain requirements.

The use of such animals on flights has ballooned in recent years. American Airlines said that between 2016 and 2017, the number of customers transporting service or support animals aboard their planes rose by more than 40%.

Now, the airline is cracking down.

Passengers with a support animal have always had to provide a letter from their mental health professional. But the airline said it will be stricter about contacting these professionals well in advance of flights, in order to verify their notes.

Owners had been allowed to fill out paperwork the day of their flight, or even at the airport, a spokesperson for American Airlines said.

Fliers also now have to sign new behavioral guidelines for their animals. The form mandates that emotional support animals be kept on a leash or harness throughout the flight, and says that the animal can be denied travel if it exhibits "any severely aggressive behavior."

Additionally, American Airlines now says that some animals are off limits entirely because they pose a safety or public health risk.

This includes not only insects, goats and hedgehogs, but also ferrets, spiders, and non-household birds, like chickens and hawks. Unclean animals, or animals with an odor, are banned, too.

The airline's revised rules go into effect on July 1.

Delta and United both issued guidelines tightening the rules on emotional support animals earlier this year.

Delta said that all passengers attempting to board with a service animal would have to show "proof," 48 hours in advance, that the animal is in good health and has been vaccinated.

Both airlines started requiring those flying with emotional support animals to sign a form that their animal is well behaved, in addition to asking for a letter signed by a doctor or licensed mental health professional that certifies the passenger needs a comfort animal.