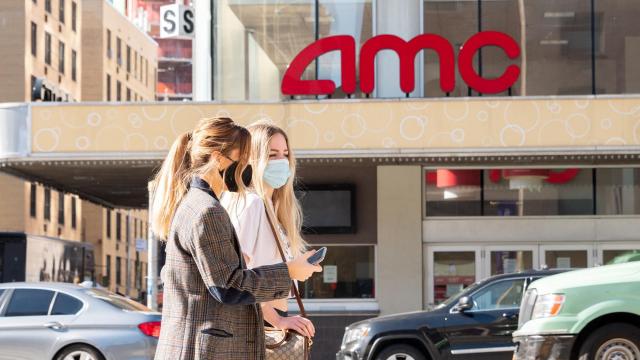 CNN — After a disastrous year, theater companies had a reason to be optimistic on Monday.

AMC's stock spiked as much 50% following an announcement of early data from drugmaker Pfizer that its coronavirus vaccine is more than 90% effective, which is far better than expected. The company's shares were up a whopping 80% in premarket trading right after the news broke.

Cinemark, the third largest movie theater chain in the US, also got a major boost, with its stock rising more than 40% after the opening bell.

Since shutting their doors in March, theater chains like AMC and Cinemark have tried to reopen with safety measures to help curb the virus's spread. Yet, the industry has struggled to bring audiences back to theaters.

It cannot be understated how badly the coronavirus pandemic hit the movie theater industry this year. The pandemic has caused major films like Marvel's "Black Widow" and "No Time to Die," the latest James Bond installment, to be delayed until next year. While some films like Warner Bros.' "Tenet" have hit theaters, it hasn't been enough to put audiences in the seats.

The lack of movies, and lack of audiences, has decimated the box office and put theaters into dire straits.

For example, AMC said last month that its existing cash resources would be "largely depleted" by the end of 2020 or early 2021. The company reported last week that its revenue for the third quarter was just $119.5 million — a huge drop of 91% from the year prior.

Monday's vaccine news offered hope for the beleaguered industry, but it's not yet clear that audiences would return to the movies even if a vaccine is effective.

Shares of Disney, Hollywood's biggest studio, also rose sharply on Monday morning — up 12%. The media company's blockbusters have been delayed and its parks have been closed for months.