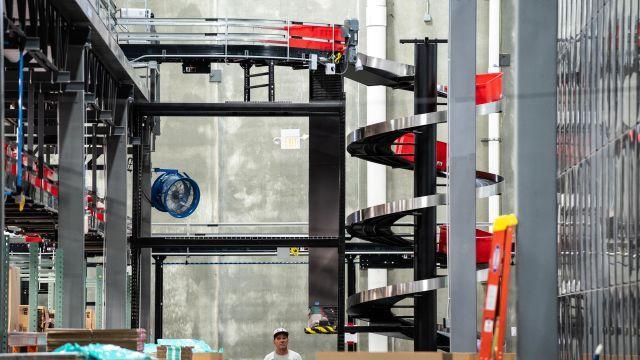 But interest in Boxed, which is not profitable and crossed $100 million in revenue in 2016, was lukewarm. “They were like, ‘What a cute lemonade stand,'” Huang said.

That changed a year ago when Amazon bought Whole Foods Market. The $13.4 billion deal shook the grocery world, setting off a frenzy of deals and partnerships that continues to intensify. Traditional retailers pursued digital technology, and online companies reconsidered their relationship with brick-and-mortar retail.

Kroger announced a partnership with Ocado, an online grocery company, to use its robots to pack online orders. Target acquired Shipt, a startup offering same-day delivery services, for $550 million. Walmart acquired Parcel, a startup offering same-day delivery, and announced a partnership to use Alert Innovation, a small company that employs automated carts to fulfill grocery pickup orders at stores.

And on Tuesday, Boxed announced that it had sold a minority stake to Aeon Group, one of the largest retail chains in Japan. Alongside investors including Alpha Square Group and CDIB Capital, Aeon invested $110 million in Boxed. The deal values the startup at $600 million, according to a person familiar with the agreement.

“Are technology folks like us going to figure out retail faster than the retailers figure out technology?” Huang asked. “In some ways we’re all kind of fighting the same fight against the gigantic folks online.”

Food shopping is one of the last major holdouts to online retail. Groceries are unique in that their inventory is perishable, fragile and heavy. Grocery customers often shop at the last minute, like to see the food they are about to eat and don’t want to pay high delivery fees.

Even Amazon, with its Amazon Fresh online grocery service, has struggled to gain ground in the business. The company’s Whole Foods deal, paired with Walmart’s 2016 acquisition of Jet.com, underscored that the future of selling food and household items requires cooperation between the digital natives and the old-school retailers.

Grocery companies “are realizing that with Walmart and Amazon moving at their pace, you need to pick yours up, too,” said Greg Spragg, a former chief merchant at Sam’s Club, the wholesale retailer owned by Walmart, who now consults at GrowthWise Group. “I wouldn’t call it fear. I would call it a wake-up call.” Walmart, the nation’s largest grocer, declined to comment. Amazon did not provide a comment.

Global food retailing is a $5 trillion business, and just 3 percent of the world’s grocery spending happened online last year, according to Forrester Research. Online grocery sales are expected to double over the next four years, reaching $334 billion by 2022.

Market research conducted by Morgan Stanley in July found that 56 percent of consumers who were likely to order groceries online said they would most likely order from Amazon, compared with 14 percent who would go to a mass merchandiser and 10 percent who would use their local supermarket.

Phil Lempert, a grocery industry analyst, predicted store closings for chains that do not evolve to meet the changing needs of customers. Stores offering curated selections, specialty items, cooking classes and the option to buy online and pick up in person will thrive, he said.

“The bulk of stores — they haven’t been doing exciting things for a long time,” Lempert said.

Josh Hix, chief executive of Plated, a meal kit startup, said the Amazon-Whole Foods deal had immediately changed his discussions with grocery chains. Meal kit companies have a checkered record. But the grocery companies saw an opportunity to use Plated’s data and research on recipes and taste preferences.

“The pace of follow-ups went from ‘This is interesting, and we’ll be in New York again in five months’ to ‘This is really interesting, and how’s tomorrow at 9 a.m. look for another call?'” he said. After years of not being taken seriously, “it was very cathartic.”

Plated held deal conversations over the summer with “virtually everybody” in the industry, Hix said. In September, it sold to Albertsons, a large grocery chain. At the time, Albertsons’ chief executive, Bob Miller, said the deal was “the latest example of Albertsons Cos. meeting our customers wherever and however they like to shop.”

Most of the big grocers “have wanted to kill us, partner with us, invest in us or buy us — all probably in the course of the same conversation,” he said.

Huang, who previously founded a gaming company that was sold to Zynga, decided that the opportunity was too good to sell now. He opted to take the investment from Aeon instead.

The ownership structure allows Boxed to license its technology to its retail competitors in the United States as they try to become more digital. The company is in talks with 10 or so potential partners for various pieces of its technology. They include mobile app technology, personalization software, a packing algorithm that maximizes space in shipping boxes, software that tracks item expiration dates, order management software and warehouse robotics automation. Boxed, which is based in New York City and has about 250 full-time employees, sells food and other everyday essentials in bulk. It has built a sizable business supplying snacks and office goods to companies and also earns revenue selling ads to suppliers to promote their items in its e-commerce site and app.

Huang spoke about the deal with Aeon from Boxed’s New Jersey fulfillment center, as a self-driving cart rolled around the corner and slid sideways toward a shelf, waiting for a worker to place a box of Pampers or a can of Planters on its back. Nearby, a three-story automated wall of plastic tubs rearranged itself, while workers dropped handwritten notes to customers into boxes before taping them shut.

Grocery delivery is difficult to do affordably, but tech-driven efficiencies like those developed by Boxed, Amazon and others have forced change on the industry.

“Consumers want convenience and will pay more for it,” said Michael Pachter, an equities analyst at Wedbush Securities. “Once they stop going to grocery stores,” he added, “grocery stores are going to have a problem.”