Amanda Lamb: Where do we go from here? 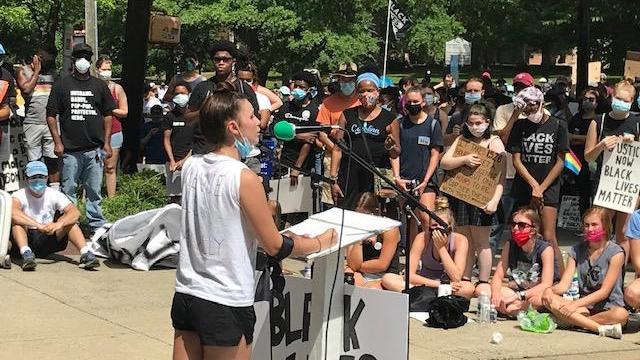 One of the things that has struck me as I have covered protests in the past week, both peaceful and disruptive, is the number of young people involved. In fact, all the rallies and marches I have covered have skewed on the younger side.

Most of the images we’ve seen of looting and acts of vandalism, like smashing windows and spray painting buildings, have involved young people. This is disheartening, no doubt.

But, on the other hand, many of the peaceful protesters I have encountered with some of the most thoughtful and insightful comments have also been young people. This gives me hope that there is a generation of young people who are passionate about equality and are willing to stand up for what they believe in, and do it in a constructive way.

I covered a human peace chain this week on Hillsborough Street in Raleigh and interviewed several boys between the ages of 15 and 18. Let me be frank, interviewing teenage boys isn’t usually my go-to for quality feedback—but I was proven wrong.

“We’re here to stand alongside the black community in their fight against oppression and violence,” said 18-year-old Benjamin Watson.

I also interviewed 15-year-old Paul Rakestraw who told us his family had a long history of being involved in civil rights issues and he was very proud to be representing them. He told us that despite the belief that people are deeply divided right now, he feels united by being involved in the protests with people who share his vision of an America without racism.

On Saturday, I spoke with two girls, ages 13 and 14 years old, who came to a march in Chapel Hill with their family. They said now is not a time for anyone to be silent.

I also talked to several recent graduates of UNC-Chapel Hill who told me they had no choice but to be out there in the sweltering heat marching because everyone’s voice is needed for real change to happen.

So, instead of the disturbing images of the violence that have happened, I choose to hold onto the good—young people who care about their community, their state and their country. They see an America where everyone can and should be treated with equity. I truly believe despite the division we feel right now, this is possible with them leading the way.

In the words of Cat Stevens...”Teach your parents well...feed them in your dreams.”