While Hurricane Irene didn't do nearly as much damage to North Carolina as Hurricane Katrina did to the Gulf states, it sure wreaked the same amount of havoc on my family. Thankfully, I was only gone a week this time covering the storm and its aftermath, while Katrina had me on the road for two weeks.

The week Irene hit -- the week I was at the North Carolina coast -- was my daughters' first full week of school. They are in two different schools across town from one another with start times that are roughly fifty minutes apart. For one of the schools, we are in a carpool.

Two parents can divide and conquer in these situations -- one parent alone has the weight of the world (in this case, my husband) on his shoulders. Luckily, several friends pitched in to help us with logistics, and for that, I am seriously thankful. But I missed a lot of firsts, including my third grader's meet-the-teacher night, and my older daughter's first full week of new beginnings in middle school. 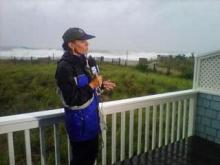 Per usual, Irene (like most hurricanes) fell on a weekend. It happened to be a weekend my husband and older daughter had a trip planned to the mountains with their Y-Princess group, so another family stepped up to the plate to take my little one in his absence.

So, in essence, Irene's impact had a ripple effect on my family and friends who had to take over my duties while I was working at the coast, an impact on the home front that can't be truly quantified or compensated for.

I just hope "the damage" my absence caused can be repaired. I started with a long list of thank yous, and an evening spent with my family, oh, and lots of hugs.