It was bound to happen. We had talked about it - getting a new dog, that is - after our other two passed away within a year of one another. But somehow we just hadn't gotten around to it. We had become accustomed to the freedom of not having a furry four-legged creature to care for along with our two children and two demanding careers. I, in particular, had grown accustomed to a cleaner than normal house with no wet dog smell and no tumbleweed-sized balls of dog hair floating through the den.

And so it was on a bus ride back from Washington, D.C., where I had been on a two-day field trip with my daughter's fifth grade class that I got the e-mail, a single photo of my second grader with what appeared to be a dog between her legs. It took me a minute to concentrate on the photograph after a mind-numbing two days of touring the nation's capital with very little sleep. Finally, I was able to focus. My husband had clearly gotten us a dog without discussing it with me first. 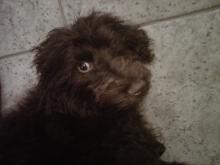 A lot of women might have been angry about this subversive introduction of such an important decision into their lives, but I was frankly too weary to be angry, not just because of the field trip, but because of my crazy life in general. I decided that this was it. We had a dog. The decision was off the table. It was done. We were here, in this place, once again we were a dog family.

Many of you who have read my blogs or parenting humor books may already know that I haven't been the most dedicated dog mother in the past. So, on that bus ride to Raleigh, somewhere on I-95, I decided that I would mend my ways, that I would start this relationship off on the right foot. That night as we entered the quiet house late, I went immediately to the kitchen and opened her crate. She trudged out sleepily and lay down next to me on the floor, putting her head and one paw on my knee. Without hesitation I began stroking her ears and back. I can't honestly say it was love at that moment, but it was pretty darn close.

When I come home at night now she greets me by rolling over on her back so that I can rub her belly. My daughters even said they were jealous of her because I was giving her so much attention.

The girls are over the moon. They play with her, dance with her, even dress her up. They named her Bella. She cries when they leave, and races to greet them when they return. She has the best demeanor of any dog I've ever seen - allowing herself to be poked, prodded, picked up, and twirled without any sort of protest. It's as if the attention they give her is all the matters to her.

And when they are done, she melts into an exhausted heap onto our couch in between the brown throw pillows which match her brown curly hair perfectly. Due to the camouflage effect, I often pass her and ask everyone where she is. Then, I notice one eye cracked open amid the mass of dark brown curly hair, peeking up at me. I don't shoo her off the couch. I simply sit down next to her and rub her ears.

And now, I can say wholeheartedly on behalf of everyone in the family, it's definitely love.