Maybe my kids pick it up from the proliferation of cartoons like "Sponge Bob" where the words "stupid" and "idiot" are tossed around ad nauseam. But after one too many sneak attacks where they thought I was out of earshot, I was done with my daughters using these words towards one another as barbs when they were fighting.

"I have an announcement," I said one Sunday. "Anyone who says a bad word, which includes any word meant to be an insult to another person, must put 25 cents into the potty-mouth jar. At the end of the week, if someone has not offended, the person can take the money and buy a treat, like an ice cream."

Understandably, they looked at me like I was crazy. But I was serious. I was done with it. I was a mother on a mission. I wanted to hit them where it hurt. Maybe 25 cents doesn't seem like a lot, but I figured after continually taking it out of their piggy banks and handing it over, they might finally get the picture. 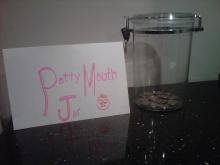 "OK, so does that include you guys?" my oldest daughter said with her hands on her hips.

"Of course it does," I said without really thinking about it.

"So, like when you get mad at someone in traffic or stub your toe and you say --"

"OK, stop right there. I get it. Yes, we must be held to the same standard. You're absolutely right," I said thinking about whether or not I had quarters in my wallet at that moment. So, here's the rub. At the end of the first week, only two people had contributed to the jar, and it wasn't my daughters. Suddenly, they are the potty-mouth police, sneaking up on me as I engage in a heated conversation on the phone, or listening intently from the backseat as someone cuts in front of me on the highway, or watching and waiting when I hit my knee on the edge of a table and am wincing in pain.

So, I guess I have two choices-clean up my act, or go to the bank and get more change...