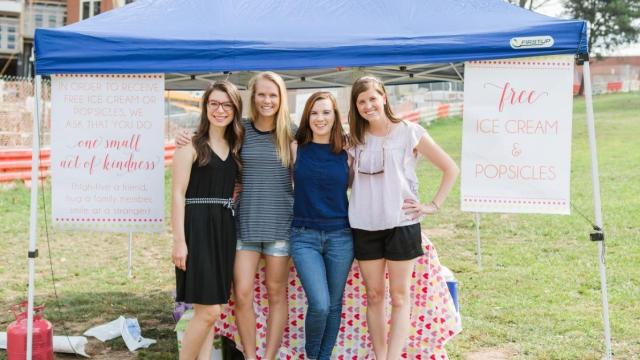 In the spring of 1998, the folk pop star, Jewel, released a song called “Hands.” The first line of the refrain is: “In the end only kindness matters.” It was a catchy tune, but I at thirty-something I didn’t truly embrace the sentiment as fact. Now, I do.

Kindness is something we talk about a lot in our culture, but are we practicing it? Maybe even more importantly, are we being intentional about it?

I recently met one young woman who is making a career out of kindness. Carrie Grace started with simple acts of kindness in the Triangle - passing out balloons and ice cream in Durham with her friends and asking the recipients to pay it forward. She called them “Kind Days” and passed out a total of 1,000 treats to children over a three-year period.

Now, she has her sights set on an even bigger goal. She is launching a “Kind Tour,” a 10-week, 13-city journey. She is connecting with nonprofits across the country to perform acts of kindness in different communities. Some of her “pop-up Days of Kindness” will include making and distributing meals to the homeless, handing out books to children in low-income neighborhoods, and bringing billboards to college campuses where students can post inspirational notes to one other.

In such a divisive world where there is so much daily strife, why would a young woman from North Carolina want to embark on such a big project? Carrie Grace says she has been inspired by others’ acts of kindness and truly believes that “people are more kind-hearted and generous than we give them credit for.”

Currently, Carrie Grace, a motivational speaker by trade who focuses on improving workplace culture, is trying to raise $10,000 in order to achieve her goal. It may sound like a lofty goal, but it’s one she is convinced is worth pursuing. To date, she has raised about twenty percent of the money.

“My main goal is to leave a community better than I found them. I want to be able to go into a community and work with their local non-profits to create more opportunities for them and connect people to ways they can contribute to needs throughout the year,” she said. “I look around at the current climate and feel like we could use more kindness and treat one another better in general. I kept saying that I wanted the world to be kinder but realized that I needed to be part of the solution instead of just complaining. I wanted to use my flexible work schedule and my heart for driving kindness forward to be able to have a tiny impact on the world, and hopefully a ripple effect on the communities I get to work with.”

She figured it out way before I did. Yes, Jewel was right 20 years ago, and she’s still right today. Only kindness matters.

To learn more about Carrie Grace’s project, go to her GoFundMe page.