Amanda Lamb: Mother to mother - a talk about postpartum depression with Brooke Shields 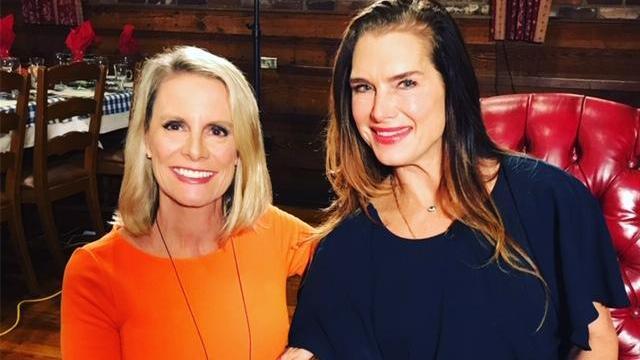 When we hear the name “Brooke Shields,” most of us think model, movie star, teen idol from the 1980s. Yet, in the past decade, and then some, Shields has positioned herself as a leader in speaking about postpartum depression. She was diagnosed with PPD after the birth of her first daughter in 2003. Shields intimately shares her struggle with the disease in her book, "Down Came the Rain."

“My desire was born out of the need to get help, the need to really bring to light the condition that so many people are effected by, but people are so ashamed of. Untreated and not acknowledged, these can become the stories we hear about, the very horrible tragic stories that we hear about,” Shields said when we sat down for an interview at the Angus Barn last week.

She was in town to speak at the Evening of Hope hosted by the Foundation of Hope, an organization started by the Eure family, which founded the Angus Barn, in 1984. The foundation has raised millions of dollars to fund mental health research at UNC-Chapel Hill’s Department of Psychiatry.

“This is something that's really important to me because that was one of the biggest problems that I really encountered was lack of information out there, and the lack of attention being put in the right area,” Shields said.

I admit it. I’m old-school. I’ve been doing this job for almost three decades, so, it’s pretty hard to impress me, and pretty easy to disappoint me. But Shields is the real deal.

She asked me if her hair was parted correctly. I was dazzled by her cute orange shoes. And we shared the roller-coaster life that comes along with raising teenage girls. But it wasn’t just her down-to-earth demeanor that impressed me, it was the candid way she spoke about her battle with PPD.

“I couldn’t believe that I had been so devastated by it, and I was made to feel horrible about being weak, and not just being able to get over it. And ‘it’s not really a real thing.’ And, ‘oh, it’s just the baby blues.’ And ‘oh, honey, you’re just tired.’ But there was a real physiological change in my biology that affected my brain chemistry to such an extent that I was considering and trying to find ways to escape my life,” Shields said.

Her goal was, and is, to create awareness about the issue so that others will feel safe reaching out for help.

“When I realized there was such shame surrounding it, I thought someone had to step forward and take responsibility for cracking it open, to see at least if we could get some light in there, and see if we can get a dialogue going,” Shields said. “I have to force myself to say, 'Yes, I take medication,' because we’re taught that it’s something you should be ashamed of. And we’re taught that you should be able to power through it.”

Shields found help through medication and therapy, but credits her family’s support from preventing her from suffering alone in a dark place.

“I ended up being really lucky that I had a family that was aware and cognizant and stayed on me, and I found the right doctor," she said.

She said we need to change the way we view mental illness in general—to not see it as a personal deficiency or weakness, but as a disease that should be treated like any other physical ailment.

“We need to shift the way we talk about it,” Shields said. “I used to say if you have diabetes, I would tell you to take insulin. There are medications designed and programs designed to help people to get through it.”

Shortly after I interviewed Shields, I sent a photograph of the two of us to a text thread of my college friends. While most of them were excited that I had interviewed one of our favorite stars from the most prominent decade of our youth, one friend named Nikki had a very different reaction: “That book seriously saved me, it’s true.”

Nikki shared more about her own experience after the birth of her daughter.

“I had my first child when I was 37. I had had a busy, fulfilling life with a career prior to her birth. I decided to stop working and stayed home to care for my baby. She was a challenging baby and wouldn’t stop crying if I didn’t keep her moving. She did not like to be in baby devices, so I either kept moving with her or listened to her cry for hours. The crying felt like knives scratching on my body. I felt immobilized, isolated, sad, and confused. I thought that this time in my life was going to be magical for me and instead I felt miserable and fantasized about giving my baby away. Some of my thoughts were dark and I was scared to tell anyone how I felt and what I was thinking. I thought that they would think that I was horrible for not being in the blissful, grateful state that I was supposed to be experiencing during this time. I felt like something was very wrong with me."

"I found Brooke’s book during this time and it literally saved my life. For the first time, I felt like I wasn’t alone and I understood what was going on. I stopped beating myself up mentally for my thoughts and feelings. I sought help and I started talking about my experience. I started working hard to find supportive friends with babies even though leaving the house seemed impossible. Things started to slowly turn around. I will always be grateful to Brooke for having the courage to speak out honestly about her experience and help me to figure out what was happening to me and seek help and support.”

The moment Nikki told me her story, I realized that Shields was one of the rare celebrities who had broken through the shimmering wall of fame that separates the famous people from the rest of us. She was just a mother, with the same worries, fears and self-deprecating feelings that all mothers have. She was also a mother with a platform and the rare ability to impact so many people, and she was using it for good.

Thanks Brooke for not disappointing this old-school reporter or the 13-year-old girl who admired you from afar in movies and magazines in 1980.

If you or someone you know is struggling with postpartum depression or perinatal mood disorders, Postpartum Education and Support offers programs and support at locations across the Triangle. Call the support line at 919-454-6946