Amanda Lamb: More than a score

I’m going to say it out loud. I know a lot of people have been thinking it, but it’s like saying the emperor has no clothes. No one wants to be the first one to say it. So, here goes: There is no correlation between standardized tests and future success—in college or beyond. Yet, we continue to use them as a measurement to decide who is worthy to get into what college. 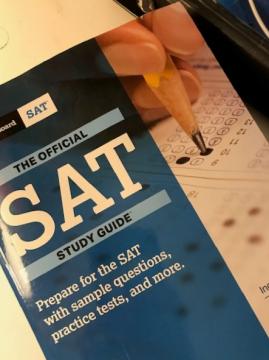 Not only is this a myopic view of human beings to judge their worthiness by a score on a standardized test, but the pressure to do well on these tests is destroying our children. Not only are they stressed out, but they’re spending far too much time preparing for these tests when they should be concentrating on their school work and other activities like sports, extracurriculars and community service. And for those students who have jobs, the pressure is even greater to find the time to study for standardized tests that are not only a barometer for getting into college, but often determine whether or not someone gets scholarship money.

I’ve been down this road before—my second child is now going through the process. At college information sessions the presenters tell us they take a “holistic” view of the students, looking at everything from grades to class choices to special talents outside the classroom.

I really want this to be true and, for some schools, I truly believe it is. But as a former alumni interviewer for my alma mater, I repeatedly interviewed students with fantastic grades, engaging personalities and a long list of activities that included serving their communities. And yet, for the most part, they were not accepted the university. A handful of students I interviewed over the years got in, and they were rarely the ones I wrote glowing recommendations for. So, what made the difference? There’s no denying it—standardized tests.

And just to be clear, just as standardized tests are not a predictor of future success, neither is the college you attend. In fact, there are many successful people who never graduated from college. The only predictor of future success in my opinion is having a child who finds a passion and is willing to work hard to pursue that passion. That’s it, period. Yet, somehow, we’ve created a generation of high schoolers who believe that their whole lives depend on these choices. That’s a lot to put on the shoulders of a 17-year-old.

I think it’s time that we, as parents, stand up to this false sense of importance that society has given to standardized tests. Let’s turn the narrative around and make our children understand that they are worthy for so many reasons and scoring well on a test doesn’t even rank in the top ten.

My child is many things. She is kind, she is smart, she is funny, she is creative, she is talented, she is hard-working. She is not a test score. And whatever college she chooses to attend, they will be lucky to have her. I’m sure you feel the same way about your children. Make sure you tell them …