Amanda Lamb: Keeper of the stuff

“I can’t find my glasses,” my younger daughter said to me one night as I was putting her to bed.

“What do you mean? They’re not in your book bag? Did you leave them at school?” I asked wearily, knowing that as mothers, we are always the prescribed guardian of all of the important stuff in our house, whether it is in our direct custody or not.

“No, I think they are at the dance school,” she replied with a yawn.

I mentally ticked through the following day and tried to imagine how I was going to shoehorn a glasses-search-and-rescue mission into my busy schedule. But knowing that she can’t see very much without the glasses, I realized the mission would have to take priority. I also winced at the thought of buying an expensive pair of new glasses.

So, the next morning, as the dental hygienist was preparing to polish my teeth, I called the dance school and asked if they had found the glasses. As it turned out, they had found the case, but not the glasses. I pictured them wedged beneath a cushion in the lobby, and decided that on my way to the courthouse I would swing by and look for them myself.

A woman who works in the office in the dance school met me apologetically at the door and said she would help me search. We immediately went in to the dance studio where my daughter finishes her classes on Tuesday nights and started frantically looking under, behind and on every surface. 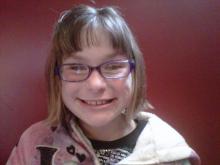 Suddenly, there they were, perched on a small ledge near a window that protruded from the wall. I practically heard the Hallelujah chorus singing above me. Thrilled, I grabbed them and sped to my daughter’s school to drop them off. When I got to her classroom, she was at gym class, so I gingerly cleaned the little lenses and delicately placed the purple frames on her desk.

“So were you surprised to find your glasses at your seat when you got to your classroom after PE today,” I asked her when I walked in the door from work, expecting a hero’s welcome.

“Not really. I figured you would find them,” she said matter-of-factly as she opened a bag of pretzels.

“You’ll never guess where they were,” I said, waiting for her to be amazed.

“I’m sure they were right where I left them, on that little shelf in the big dance studio,” she said as she popped a handful of pretzels in her mouth.

Wow, I thought to myself. That was some information I could have used.