I knew immediately when I saw him pawing through the sand beneath his chair that something was seriously wrong. I had been enjoying a rare moment of peace reading my book under the shade of the umbrella while my husband played in the ocean with the kids. Suddenly, he was there by my side lifting up his chair and digging frantically.

"What did you lose?" I asked as I closed my book and waited for his answer. But he just kept digging. I could tell by the pained look on his face that whatever it was, it was very important. "Keys, wallet, cell phone?"

"You don't want to know," he said in a quiet voice without looking up at me.

Turns out he had lost his wedding ring. He had taken it off and placed it on his towel while he applied suntan lotion, and then forgot to put it back on. As he was in the water with the kids, he suddenly remembered it, and ran back to the chair, but it was gone.

As soon as he said the words "I lost my wedding ring" out loud, about half-a-dozen Good Samaritans got down on their hands and knees with my family and started digging. One little boy even offered his sifter so that we could sift the sand. After about an hour of angst-ridden digging, we decided we needed a new plan. We were told by the locals that people with metal detectors came out at the end of the day and combed the beach for loot. So, we marked off the spot and decided to come back later and try to find one of these people. But as the late afternoon neared, showers came through clearing the beaches of everyone, even the metal detector guys. Still, my husband and my oldest daughter borrowed a rake and went back to the spot in the rain to try one more time. They were told that large trucks came through every night and churned the sand, meaning the chances of finding it the next morning were even worse.

That night our whole family was depressed about the loss. Not only was it my husband's wedding ring, but it had been his father's ring. His father passed away in 1993, so the ring had great sentimental value to my husband. My youngest daughter said she had "asked God twice" to help us find the ring. We started talking about things like "bad karma," and how the loss of the ring might be a "symbol." OK, I confess, that was me, I'm somewhat superstitious. Clearly, my negative attitude about the situation wasn't helping anyone.

That night my husband understandably could not sleep. He got out of bed at sunrise and went out to the beach in search of a metal detector, but there was no one. At about 6 a.m., he came back and started Googling "renting metal detectors" which was no easy feat in the small, remote coastal town where we were staying. So, he went back out. After walking about a mile, he finally saw Roy.

Roy had the lone metal detector on the beach that morning. My husband ran right up to him and asked for his help. When he told Roy the spot was more than a mile down the beach, Roy was reluctant to follow. He also questioned my husband at great length about where and when the ring was lost.

"People tell me these stories all the time," Roy said. "And a lot of times they're wrong. They really don't know, or even if, they really lost it."

But somehow my husband convinced Roy to come with him. So they walked back to the spot and Roy started to work his magic. He went around the edges of the spot we had marked off. He went from the spot to the water. He circled back and went back and forth through the area with the stakes around it. Nothing. They were about to give up. My husband decided that he had done everything he could, and the ring just wasn't meant to be found. As he turned to go back up to the boardwalk, Roy's machine suddenly beeped.

"It says gold," Roy said with a grin as he looked down at the digital screen on his metal detector. Then Roy started digging with his special digging tool. My husband could see the glint of gold as Roy dug about four inches down and then delicately sifted the sand to reveal the ring. 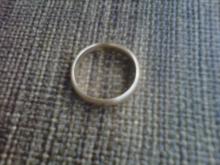 My husband wanted to pay Roy. Roy refused. He wanted to buy Roy breakfast, or at least a cup of coffee. Roy also refused these gestures. He said that finding such an important item for someone had made his day, and that was payment enough.

I awoke to find my husband sitting on the porch with a cup of coffee that morning, looking weary.

"You didn't find it, did you?" I said sympathetically, feeling badly for my "bad karma" comment the previous evening.

He raised his hand and smiled as he revealed the shiny gold band. I was glad that my skepticism had not been a self-fulfilling prophecy. I immediately woke the girls to tell them because they had been so been so upset the night before.

"I guess my prayers worked, Mommy," my youngest said as she rubbed her sleepy eyes and tried to smooth down her crazy bedhead.

Silently, I thanked God and Roy, and hoped that Roy would have good karma for many days to come.