Bottom line: Our family has never been good at science projects.

From coming up with an idea (don't even want to recall the "what does nail polish do to coins?" year), to its implementation, it is just not our forte. In many ways, I feel like I fail my children in this department because their projects seem to be doomed from the start.

This year, my third grader had to do an experiment with plants. She actually came up with a pretty good idea to use different types of water (tap water, bottled water, rain water and salt water) on different plants to see which kind of water worked the best. My concern was not the idea itself, but our consistent inability to ever grow anything in our home. Our lack of acumen when it comes to keeping things alive also extends to goldfish won at the State Fair, but that's another blog entirely. 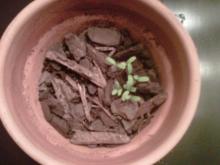 Each day, she watered the plants meticulously with the same amount of water at the same time. She would then get out her journal to write down her observations. For two painful weeks they were the same: "No sprouts," "No sprouts yet," "Still no sprouts."

Finally, one morning, my older daughter noticed a tiny green bud popping through the potting soil in the bottled water pot. We literally danced around the kitchen with joy. We measured the bud, took pictures from every angle and then my daughter wrote an epic journal entry.

To say it was a big relief that something finally grew is an understatement. In the triage of things mothers worry about, this ranked pretty high on my "can't sleep because I'm going through all of my worries" list in the middle of the night.

The plant has since sprouted several new buds. Nothing ever grew in the other three pots.

"Mom, it's OK," she said when I apologized again for not having a green thumb. "I proved my hypothesis right, that bottled water was the best."

And thankfully, she proved my hypothesis (that we can't grow anything) wrong!