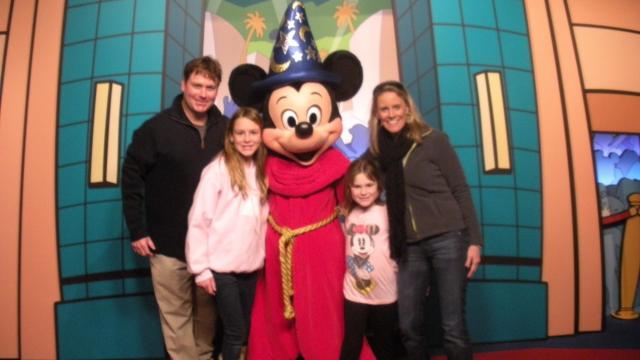 OK, so I admit it, I was sort of dreading the Disney World vacation. Actually, not just sort of, a whole lot.

I knew the kids would have a blast - that's what fueled me. But as I am not a big fan of crowds, lines and cartoon characters, well let's just say I was anxious to say the least. I had so many people tell me: "You're going to have sooooo much fun!" I was like, really? You know me, will I really enjoy it? I was skeptical.

I'm here to say folks that it's confirmed - I am not impervious to the magic of Disney. It started almost immediately, the feeling that anything is possible at Disney (except for maybe a fast pass to Space Mountain on a crowded Saturday). I saw the joy, the wonder, and the possibility through my children's eyes.

Amazingly, despite the lines, the crowds, and the exhaustion, there was little whining from my children - and surprisingly, also very little from me. Their enthusiasm and excitement was infectious, from my oldest daughter's recounting of every detail of every scary ride she rode, to the Minnie Mouse ears that stayed permanently fixed on my little one's head. I found myself agreeing to things I wouldn't normally agree to - animated shows, posing with cartoon characters, and ice cream in the middle of the day.

Now as I sit in the car on I-95 taking the long journey home, I see my Minnie asleep in her car seat behind me, the ears, the dress, the gloves, the whole shebang. She is cradling a stuffed Bambi and holding a ribbon attached to a Mickey balloon that looms just above her head.

My oldest one who will not as easily admit to being touched by the magic (the apple doesn't fall far from the tree) is asleep with her Mickey lariat around her neck complete with 12 pins of Disney characters she has collected throughout the trip.

I can't help but get a little misty-eyed, but I am comforted by the fact that once touched by the magic, you know you will return.