I’m not sure exactly what it is about the State Fair that captures a child’s imagination so vividly. But I know that when the fair comes to town, there’s no doubt that we’re going.

I have never been completely comfortable in big crowds. The anxiety is heightened by having the responsibility of two children in tow. When my girls were younger, I would purposely drive out of my way to avoid the fairgrounds during set-up week so that they might not find out that it was that time of year again. But inevitably, someone at school would let them in on the secret.

“Mom, the fair is in town!” my older daughter would exclaim. “Did you know that? Can we go? Can we?”

“Wow, really? Isn’t that something,” I would say, feigning surprise.

But now, they are much more savvy about it. It is not a matter of if we will go, it is simply a matter of when. They plan their strategies days in advance — what rides they will ride, which parent will ride with them, what games they will play, what they will win. As the big day approaches they can hardly wait. And their enthusiasm only heightens as we walk in the gates. Wide-eyed and grinning from ear-to-ear, they can hardly decide what to do first. 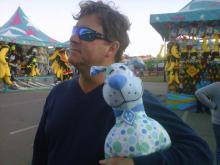 “I want to do all of the big scary rides,” my older fearless daughter exclaims.

“I want to win a big stuffed animal,” my younger daughter says pulling on the hem of my T-shirt, pulling me in the direction of a booth with giant stuffed bananas.

“I want to eat!” my husband announces.

And somehow, we do it all.

After more than four hours of fair fun that involved no less than a dozen rides, at least half a dozen games, pizza, nachos, a soft pretzel, corn on the cob and cotton candy, we were exhausted, broke and toting a large stuffed dog and a huge blow-up baseball bat.

The walk to the car felt like miles (because my husband refuses to pay for parking). But when we were finally in the car, I turned on the interior light for a minute to see my two tuckered out girls in the backseat with big smiles on their tired faces. There will come a day when they don’t want to come to the fair with me anymore, and maybe even a day when they won’t want to come at all.

Until then, I’ll grin and bear it like we do so many parenting moments, moments that we quietly dread and then secretly enjoy …

Amanda is the mom of two, a reporter for WRAL-TV and the author of several books including two on motherhood. Find her here on Monday.