Recently, my dad gave me a file of my old report cards and letters from grade school. I sat on the floor of our rec room one night laughing out loud as I read the contents. What I enjoyed the most was seeing snippets of my daughters' personalities in mine.

Really? What was I doing? Throwing paint brushes around?

Apparently my attitude about sanding my wooden dog tie rack in shop improved throughout the year. I also ended a standoff with the music teacher and agreed to try and learn to play the recorder.

But the best part of the file contained letters I had written to several presidents. I congratulated Gerald Ford on his win and asked him for a signed photo - standard kid-writing-to-president fare.

But to President Jimmy Carter I was much more specific. I told him young people needed a voice in politics, that I was concerned about what was going on in South Africa and that I was hoping he would send Secretary of State Cyrus Vance there to work it out. I'm not sure I knew who the secretary of state was when I was in my twenties, but somehow I knew in my adolescence. The P.S. at the bottom of the letter read: "I plan to be the first woman president." 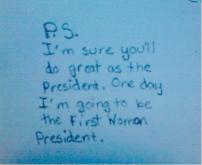 "How's that working out for you?" My older daughter asked me after reading the letter out loud at the breakfast table. I was in the process of chasing stray Cheerios around my sink with the spray nozzle faucet.

"Probably not going to happen, sweetheart," I replied without regret.