My kids recently took part in their end-of-year dance recitals, and to say I was woefully unprepared is an understatement.

This year, we were at a new dance school. My youngest daughter was involved in three dances, my oldest in one. I had no idea the time and extensive preparation that went into these things.

First of all, they were involved in two intense dress rehearsals the week prior to the performances. The girls had to arrive at the rehearsals complete with costumes, accessories and makeup. Unfortunately, I was out of town for work and my babysitter had to take my youngest daughter to her rehearsal. I now know she is nothing less than a saint for doing this. One of the generous mothers had taken pity on me and made some adjustments to my youngest daughter's costume. I gave her a coffee shop gift card for her kindness, a minuscule thank you in return for something I consider an insurmountable task - sewing. 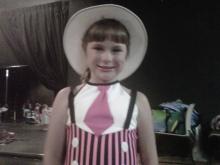 On the night of the show, the mothers arrived with their costumes hanging on rolling carts in plastic bags. They had makeup kits and coolers full of snacks. I had the costumes over my arm, my own makeup to share with my kids from my purse, and change from the floor of my car for the vending machine. The dance mothers were like pros, French braiding hair, lining little lips, lacing tiny shoes in the blink of an eye while I fumbled with too-small tights, lumpy mascara and pony tails that wouldn't lay right.

The first night we spent four-and-a-half hours at the theatre as my younger daughter's dances were spread out throughout the evening. My friends' children were not dancing until the second half of the show, so I texted them when it was time to come to the theater. They in turn texted me photographs of their lovely dinner. My oldest daughter's dance was at the very end of the night, so I was there for the long haul, regardless.

I was much more prepared for the matinee the following day. I arrived with a cooler, one hanger per costume and the most essential item - my laptop. Of course, I forgot a brush to fix their hair with, but that was minor compared to what I had forgotten the first day. I even had a neighbor bring my oldest daughter later in the day so that she would not have to wait around all day long. But I was still not totally prepared for the costume changes, the constant re-application of makeup, and the basic task of keeping track of where we were in the show.

Clearly, I am not cut out to be a dance mom. But at the end of the experience I asked my youngest daughter if she was interested in doing this next year. Her answer, an emphatic "Yes."

In the aftermath, my friend posted some photographs of her on Facebook dancing. Her smile was unmistakable. And so was mine when I looked at them. I guess I will have to grow into my new role with a little help from the pros.

Amanda Lamb is the mom of two, a reporter for WRAL-TV and the author of several books including two on motherhood. Find her here on Mondays.