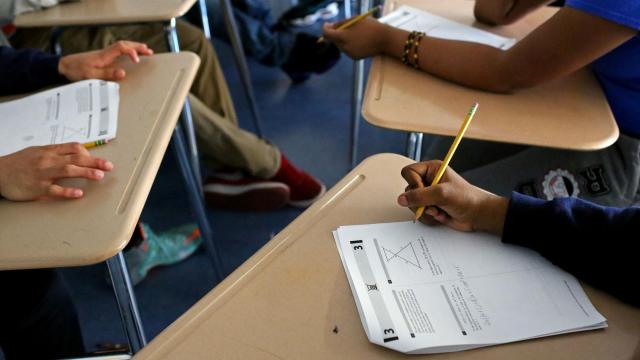 For too long, they have marginalized our children, told them they were a number, not a well-rounded human being with interests and talents who can contribute many things to a college community. It’s time for colleges to throw out this antiquated standard of measuring our children. Having a college junior, I have never felt so strongly about this in my life.

"Anytime you're going to force anyone into the exact same exam, and judge talent that way, everyone loses," Todd Rose, a professor at the Harvard University graduate school of education tells WRAL News. "What you’re going to see now is the ability to look more holistically at kids and really understand what they have to offer. Let them demonstrate excellence in a variety of ways."

Because so many tests were canceled in the spring due to the pandemic, many students will not get a chance to take the SAT or ACT at all, or will have to use a very early score that’s not truly representative of their current abilities. Rose says it’s time for colleges to say good-bye to this arbitrary standard that does not properly measure a student’s worth.

“Standardized testing is never going to be the way it was, and I think that’s a good thing because those tests, the SAT and the ACT are relics an old way of thinking that we know is not true,” Rose says.

My daughter’s SAT test was canceled in June. She was supposed to get an option last week to change her registration to the August or September dates. Each time I tried to change the registration, the site kicked me out. She ultimately registered for the October date which is a joke. It’s too late if you are applying to colleges in the early fall. So, game over. What?

All the kids who missed their spring dates understandably scrambled to take the limited dates that are now available. Instead of adding numerous additional dates to make up for this, the College Board simply threw up their hands and said, oh well, we’re overloaded with people trying to register. I spent one hour and six minutes on hold with them and then got disconnected. Seriously, you hold us hostage to an archaic standard of measuring our children and then don’t allow them to participate?

Rose believes that for schools who eschew the tests in favor of looking at the student’s full profile will benefit from a more well-rounded student body. Even in the middle of my anger at being rebuffed by a a system I know shouldn’t matter, I find comfort in his words.

“The people who have tried to game, thinking it’s all about test scores, they’re in a world of hurt right now. The people who have been well-rounded, that have actually done it the right way, and have cared about developing themselves, they’re in a very good spot with some of the best universities,” he says. “It’s such a narrow way to think about someone’s possibilities. What they’re going to be looking for now are signs of excellence. Show me what you care about. Show me you’ve been passionate about something, that you’ve stuck with something. What have you contributed? That will matter now more than ever.”

Are you listening colleges? I hope so!